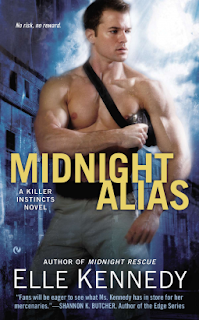 She’s smart, seductive, and in way over her head.  He’s her only way out.

An undercover DEA agent has gone off the radar. Suspecting an internal mole, the government needs Luke Dubois and his elite team of operatives to recover their man, and the New Orleans native thinks he’s found his way inside the dark underbelly of Manhattan: Olivia Taylor, the girlfriend of a mob boss and the sexiest woman he’s ever laid eyes on. His new mission objective? Get past Olivia’s defenses and convince her to take a chance—on him.

All Olivia wanted was to finish law school and live a normal life, but that dream was shattered when one dangerous night put her deeply in a mobster’s debt. Now Luke and his team will help her escape—in exchange for intel on the missing agent. But Olivia doesn’t anticipate her intense attraction to the reckless Louisiana charmer or that she’ll be forced to risk everything—including her heart.

This is an ARC that I obtained from Net Galley and I have to admit that I didn’t almost read it.  That would have been a terrible mistake.  It was the fact that I had read several Elle Kennedy books in the past that convinced me to give this novel a try.  It is a tense story, bearing the marks of many an espionage tale, with the team of expert marksmen, technological whizzes, psychological experts and profilers, –all the personnel that make up a cracker jack undercover team.  All these folks are ex-military and work as mercenaries all over the world, but have now been hired by the DEA to help find one of their agents who has disappeared.

This is not an easy book to read–not light and frivolous and fluffy.  This is hard-core trouble, danger lurking as good people try to stand in the way of a man whose conscience is dead, who is pathological in his willingness to kill in anger, whose obsession with one of his dancers is endangering her life.  It is a novel that keeps the reader’s mind hopping all over the place, wondering how Olivia can get away from this predator, how LUke can find a sense of himself that isn’t all wrapped in the violence of his life, hoping that somehow Trevor and Isabel can manage to find their way toward each other.  It is also a deeper look into the fact that the “war against drugs” is languishing, is probably doomed according to experts, and yet there are good people out there who keep on trying to prevent escalation of the use of illegal drugs, the insane amount of money that is available to those who are at the top, and the sick individuals who have used the mob to nurture their violence and evil use of human beings as mere tools for pain or pleasure.

There is a strong possibility that readers may be upset and troubled by the violence and evil that is a part of the context of this novel.  I happen to think there are books we need to read, feelings we need to feel, upset we need to experience in order to stay grounded in a world that is real.  I know all of us like fiction and there are times when I want to read to get away from the realities of daily living.  Yet I also know that all of us owe it to ourselves as citizens of the world and of this country that we are aware of the actions of committed people who work undercover, putting their lives on the line, and sacrificing not only life and limb but personal lives and their future, often sacrificing personal relationships they desperately need to the violence, the lifestyle of hiddenness.

I hope those who really like suspense fiction will read this book.  It is so well written and researched and it hits “below the belt” in ways that really get the reader’s attention.  There’s one other factor about this book:  Olivia is a woman whose experience is very much like many in our society who are felled by overwhelming healthcare costs for a loved one or parent, needing to find some way to bring in sufficient monies for very large medical bills.  That she chose to be a stripper is certainly not a career choice that most women would consider.  But it testifies to this character’s willingness to do whatever she could to be protective and supportive of a mother whose presence in her life was absolutely critical to her future wellbeing.

All in all, it is a complicated book about a complicated part of American life and it reads well, keeps the reader glued to the page as the story goes first one way and then the other.  It’s a very fine read and deserves to be read and appreciated.