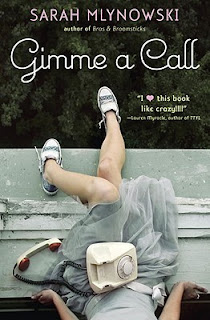 Rowena’s review of Gimme a Call by Sarah Mlynowski.

Main Character: Devi
Love Interest: Bryan (or is it?)
Series: None
Author: Facebook|Twitter|Goodreads

A new life is just a phone call away!

Devi’s life isn’t turning out at all like she wanted. She wasted the past three years going out with Bryan—cute, adorable, break-your-heart Bryan. Devi let her friendships fade, blew off studying, didn’t join any clubs . . . and now that Bryan has broken up with her, she has nothing left.

Not even her stupid cell phone—she dropped it in the mall fountain. Now it only calls one number . . . hers. At age fourteen, three years ago!

Once Devi gets over the shock—and convinces her younger self that she isn’t some wacko—she realizes that she’s been given an awesome gift. She can tell herself all the right things to do . . . because she’s already done all the wrong ones! Who better to take advice from than your future self?

Except . . .what if getting what you think you want changes everything?

Fans of Sarah Mlynowski’s Magic in Manhattan series will love this hilarious new novel with a high-concept premise.

I’ve been wanting to read this book for a while now and haven’t gotten around to it until now.  I haven’t read too many books by Mlynowski but after reading this one, I’m definitely curious for more.

Imagine you’re a senior in high school and you just broke up with your boyfriend, the boy you’ve been with since you were a freshman in high school and you’re hurting.  To top things off, you drop your cell phone into the fountain at the mall and it works but you can only call yourself…three years ago.  If you can imagine that, then you’ll jump right into the thick of things with this book.

Devi is a senior, just broke up with her boyfriend and wishes that she never met him so that she wouldn’t know how much it’d hurt to lose him the way that she has.  When her cell phone starts acting wonky and starts calling her own cell phone from three years ago (before she met Bryan), she thinks that this is her chance to change things so that she’ll have a better senior year so she gives Freshman Devi a whole lot of work to do.

It was funny because Senior Devi kept waking up to some new life because Freshman Devi was making a whole lot of different choices and it made me laugh.

This isn’t a book that takes itself too seriously and I really liked that about this one.  It was fun, it was cute and even though Senior Devi got on my nerves because she was so hot damn bossy, I still liked this one.  There were many times when I wanted to strangle Senior Devi for making Freshman Devi work so hard and when Freshman Devi stands up for herself, I grinned like a crazy person because I kept thinking, “FINALLY!”

Overall, this book was good.  I would definitely recommend this book to people looking for a fun, quirky read with great characters.  This one fits that bill.

This book is available from Delacorte. I bought this book and these are my honest thoughts on the book.
Buy the book: B&N|Amazon|Book Depository
Book cover and blurb credit: http://barnesandnoble.com

4 responses to “Review: Gimme a Call by Sarah Mlynowski.”