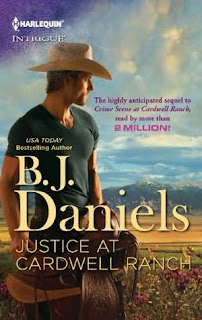 Six years ago, Dana Cardwell found her mother’s will in a cookbook and became sole owner of the Cardwell Ranch in Big Sky, Montana. Now happily married, Dana is surprised when her siblings, Stacy and Jordan, show up on the ranch and trouble isn’t too far behind. As danger draws closer to the ranch, deputy marshal Liza Turner quickly realizes that Jordan Cardwell isn’t the man the town made him out to be.

This new novel takes up where Daniels’ previous novel — Crime Scene at Cardwell Ranch — leaves off and actually brings several of those characters into this story.  However, the Deputy Marshall, Liza Turner, was only a background character then as was Dana Cardwell Savage’s brother Jordan.  Now these two are the featured players in this novel.

Six years have come and gone since the happenings in the first book.  The Cardwell siblings went their separate ways after their mother’s most recent will gave the ranch to Dana with the understanding that the profits from the ranching operation were to be split four ways each quarter.  None of the four have had very much contact with one another, especially Stacy who is the oldest sister and Jordan who is the oldest brother.  Both of them wanted the ranch sold and the money divided in the worst way, and when that didn’t happen they took off in a huff.  Now Jordan is back for a 20th year reunion with his small high school class–or so that is the cover story–but in reality he is still seeking the truth about the suicide of his best friend shortly before their graduation.  Dana Cardwell is now married to U.S. Marshall Hudson Savage, her longtime love and his deputy is taking over during his leave to aide his very pregnant wife who is on strict bed rest.  Birthing twins doesn’t seem to be easy on her.

This is a very quiet and covert love story between Liza and Jordan.  They go back six years because Liza was in law enforcement then and was involved in the investigation in the first Cardwell Ranch story.  Now she is six years older, more beautiful than ever, and Jordan is now divorced from his professional model wife who took off when the  money from the ranch sale didn’t materialize.  And once again Jordan is a suspect only this time it is because of the murder of one of his classmates who claimed to have information that his best friend’s suicide was really a murder.

There’s lots of tension in this book–tension that grows out of the cold case investigation and begins to involve a number of the old classmates.  There is a tension between Dana and her husband as he tries to keep a very active woman quiet and on bed rest in order to keep her premature labor at bay.  There is tension between Dana and her sister and the rest of the family because Stacy has never been responsible about anything and she shows up with a baby.  Dana’s husband isn’t happy about this at all.  And last, there is the tension between Jordan and his family, between him and Liza as they work through and deal with new and disturbing feelings of attraction between them while trying to keep a professional distance as the additional crimes are investigated along with the 20 year old suicide.  It’s a story that is complicated and filled with anxiety, fear that others will die mysteriously, fear that the sibling relationships will cave in once again, fear that Dana’s babies will be born too early because of all this stress.  There is almost no overt sex in this book but there is an underlying awareness that it plays a very large part in the story and in the lives and relationships of these characters.

I really like B.J. Daniels’ writing and the stories she creates.  They are never simple, almost always more involved that they appear on the surface and manage to get the reader intertwined in the story almost before you know it.  It’s always a joy to read a well-written novel and this is one of many that have thrilled and delighted romantic suspense lovers.  And it is a delight to meet up with these characters once again.  In spite of all the murder and mayhem, the long delayed revenge and re-opening old wounds that reunions can often precipitate, this is a story about family and loyalty, the values of true friendship and grieving over the loss of good people.  It is a story that unveils the deeper evils of greed and power that have driven people in a small town for over two decades, of the power one or two people to put other’s lives in jeopardy and actually bring emotional ruin into play.  So there’s lots to deal with here that is raw and real and human.  I found it to be a grand read and recommend it to those who really like a very good mystery crafted around a romantic center.

This book is available from Harlequin Intrigue. You can buy it here or here in e-format. This book was provided by the publisher for an honest review.