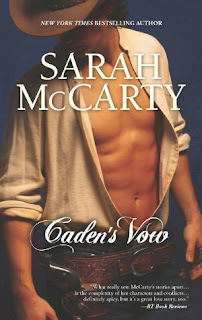 His past has haunted him for a lifetime…but one woman could be his salvation.

Gunslinger Caden Miller’s compadres are becoming a bit too domesticated for his liking. So he’s off to Kansas territory to carve out a living and a space of his own-alone, just the way he likes it.

Maddie O’Hare has been drawn to Caden ever since she escaped to the Hell’s Eight compound from the brothel where she was born and raised. And she’s not ready to let him go so easily…until she’s captured by his new neighbors.

When Caden discovers that Maddie is being held against her will on a nearby ranch, he demands they release his fiancée. Caden is as surprised by his own lie as Maddie is, but the fiery promise in her grateful kiss is far more unexpected. With old enemies catching up with him, Caden and Maddie will face a danger that tests their passion-and will either bind them together forever or break them apart for good.

Eight little boys who hid and escaped a massacre during the Mexican/American War are now grown and have become known as Hell’s Eight.  The ranch they own together is also known as Hell’s Eight and it, like all the ranches in that territory are now in grave danger because a great deal of military presence which had protected the ranchers and settlers is being reassigned to the Civil War.  Now Caden is also facing his own restlessness–all but three of the original eight have found their life partners, are married and having families, and he once again feels it is time to move on–time to keep a promise he made to his dad on that fateful day when he lost everyone he had ever loved.

Maddie has been a part of Caden’s life for a year now–living at Hell’s Eight and recovering after fleeing the whore house where she was born, abused and used since she was eight years old, and trying to regain her sense of reality.  She is a woman whose only salvation, her only psychological and emotional refuge has been retreating mentally to a “safe place” in her mind.  There is a part of Maddie that the dirt, the cruel abuse and the sexual misuse has failed to touch.  But she has come to love Caden as well, even though he appears to see her only as a fallen woman, someone he can easily leave behind.

This story is kind of a sneaky one . . . it appears not to really be going anywhere, but as the bits and pieces of Maddie and Caden’s story gradually come together, the crisis in each of their lives begins to make an impact on their collective experience.  One is readily aware of Maddie’s brokenness and that is very apparent from the first.  But Caden’s own inner turmoil, his own deeply guarded secrets and emotional wounds, while they have been buried deeply, are just as disturbing and dangerous to the future that Caden and Maddie could have together.  It is the kind of story that doesn’t back away from the realities of life in the 19th century Old West for women legally, especially for those who have had no resources or who must rely on selling themselves in order to survive.  Maddie must learn the hard way that she has practically no standing in the community apart from a relationship with a husband, brother, or father.  And for someone who  must make it on her own, it can be a very scary life.

There is an intensity in this novel that I have come to expect in all McCarty novels.  The brash reality of life without any sugar coating is characteristic of her stories and brings the raw edges of trying to survive into the reader’s awareness in sharp relief to the very cushioned life we consider normal in the 21st century.  It was a life where death was only inches away.  And as with all the previous American historicals she has written, Ms McCarty gifts readers with characters who are unusual in many ways while appearing to be what we would expect for that time period.  There are some twists and turns that catch the reader unaware here, while pointing up the deep loyalty and friendship between members of Hell’s Eight, the kind of “brotherhood” of shared experience that allows friends to tell one another the truth and to know when to back away while still offering the support of authentic respect and regard.  It is that kind of honesty that makes it possible for men like Caden and Ace to find their way in a world that is never free of personal and collective danger.

As with all her work, Ms McCarty has written in such a way that words to their work well–each word and phrase carries its own weight in telling the story.  It is a good reading experience besides giving the reader a story that entertains as well as educates.  The love scenes are beautifully written–the tension of true gentleness is perhaps more powerfully demonstrated in this story more than I have experienced in a number of recent books.  As Caden and Maddie’s relationship is pushed and pulled through the knotholes of danger and personal anxiety, they must each decide who they are, what they mean to themselves as well as to each other.  It is a very romantic story in many ways, very sexy and intense, but most of all it is a love story that doesn’t flow smoothly, making it seem oh so  much more real.  It’s a treat for McCarty fans and worth the time to read and enjoy.