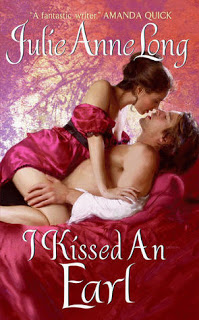 Violet Redmond’s family and fortune might be formidable and her beauty and wit matchless–but her infamous flare for mischief keeps all but the most lionhearted suitors at bay. Only Violet knows what will assuage her restlessness: a man who doesn’t bore her to tears, and a clue to the fate of her missing brother. She never dreamed she’d find both with a man whose own pedigree is far from impeccable.

“Savage” is what the women of the ton whisper about the newly styled Earl of Ardmay–albeit with shivers of pleasure. Born an English bastard, raised on the high seas, he’s on a mission to capture a notorious pirate for vengeance. But while Violet’s belief in her brother’s innocence maddens him, her courage awes him . . . and her sensuality finally undoes him. Now the man who once lost everything and the girl who has everything to lose are bound by a passion that could either end in betrayal . . . or become everything they ever dreamed.

Violet Redmond is bored. It’s not that she doesn’t love being the daughter of a very wealthy man but there’s just not much that gets her blood pumping. Because of this she tends to make impulsive decisions that may not be the best ones. When she meets the Earl of Ardmay at a ball she’s not sure what to think of him. Especially when he seems to think that her brother, Jonathan, is a notorious pirate – one that he’s been asked to bring to the King to bring to justice. Violet immediately lets him know that Jonathan could not possibly be the pirate Le Chat but when she receives more clues about the infamous Le Chat she begins to believe it IS her brother…her brother Lyon. Lyon left Pennyroyal Green over a year ago and no one had heard from him since but the clues Violet gathers all point to him. Jonathan doesn’t believe any of it so Violet takes matters in to her own hands and manages to stowaway on the Earl of Ardmay’s ship.

Asher Flint, the Earl of Ardmay, is understandably pissed off when he discovers Violet on his ship – even more so when he finds out exactly why she is there. He is intrigued by her, however, and though they are at constant odds he can’t help but be impressed by Violet for many different reasons. The couple eventually fall in love but how can they ever be together when he’s going to arrest her brother and see him (possibly) hanged? Where does Violet’s loyalties lie?

This is book 4 in the Pennyroyal Green series and though I’m reading them almost backwards (I read book 5 then 3, 6, 7, now 4) it didn’t ruin anything for me. Getting to know the characters that I’ve read about in more recent books just brings it all together in my head.

Violet and Asher were fantastic characters to read about. Their extremely tumultuous relationship was nothing short of brilliant and I adored every minute of it. These two people were so very different yet appreciated those differences. Violet for all her family’s wealth and position had never known love between a man and a woman – only familial love – and Asher was basically raised on a ship after barely having had a family at all. The falling in love part was kind of like pulling a veil from around their faces and seeing the world in a completely different way. sigh It was just so good!

Asher, for all his rough edges had a way about him that just spoke to me. At one point in the book Asher meets Lyon and they talk about Violet and why they love her. Lyon says, pretty much, I know why I love Violet – but why do you? I won’t give you the entire answer as that’s something you have to read for yourself but a part of it – and mainly the part he thought in his head – just made my heart flutter (yes, it can actually do that!):

“I’ve very little experience of what they like to call the finer emotions, Mr. Redmond. I haven’t your talent for grander expression…I can only tell you…”

How in God’s name to describe Violet? It was like trying to describe his own heart, which naturally he’d never actually seen. It was an idea, his heart; he felt it beat inside him, sending life coursing through his veins. He needed it. It was everything.

OMG that last paragraph…so damned good. Which basically describes how I felt about this book – So. Damned. Good.

I can’t say enough about how much I loved this book but if you haven’t read this series and you love historical romances then I have to say you’d definitely missing out.

4 responses to “TBR Challenge Review: I Kissed an Earl by Julie Anne Long”