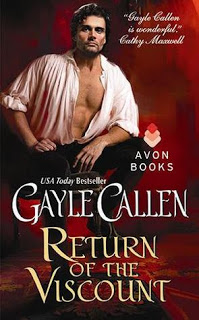 Her marriage of convenience seems far too
convenient . . .

Desperation drove Cecilia Mallory to seek a union with a stranger–one who would wed her sight unseen and grant her full access to her inheritance with no expectations whatsoever. She anticipated, perhaps, an older, undesirable, equally desperate husband–never the young, vibrant, and devastatingly attractive man who answered her call. What could such a man really be after?

Unknown to Cecilia, Viscount Michael Blackthorne, a soldier and gentleman, owes a debt of honor to Lady Cecilia’s father, and granting her unusual request to wed seemed a worthy way to repay it. But an unseen threat perilously close at hand is convincing Michael that his true responsibility is to protect the beautiful, warm-hearted lady he has married . . . the woman he is unexpectedly coming to love.

Cecilia is just 20 years old when she writes Sergeant Blackthorne in India to thank him for being such a wonderful friend to her late father. The pair continue their correspondence for two years when Cecilia, sounding a bit desperate asks Blackthorne to marry her by proxy so that she could have access to her inheritance. Her guardians were keeping it until she was 25 or married and since he was in India and she in England this seemed the perfect solution. That is until Blackthorne shows up on Cecilia’s doorstep six months later and he’s not the doddering old man that Cecilia had pictured him. Since he was her late father’s best friend she just assumed he was, well, old. The hunky man who walks into her house, granted with a cane, is NOT old by any stretch of the imagination.

Cecilia is intrigued by her new husband but also a bit pissed off that the man is in England when he was supposed to be in India and not anywhere where he could control or manipulate her! Though he has no access to her dowry, as the marriage papers stated, Cecilia now thinks that maybe she will be able to get out of the marriage and still keep her money. She has taken control of her brothers estate as he spends most of his time drinking.

Michael, who is not only a sergeant but also a viscount, wants to make something of his marriage. He truly had no plans to return to England any time soon but he was wounded and was sent to England to recover. He was anxious to meet the woman he had written so many letters to. He is hiding guilt over Cecilia’s father’s death and Cecilia is trying to push him away at every turn but he is determined to get to know her. On top of that Cecilia keeps having “accidents” that can’t be ignored and she finally believes that someone is trying to harm her. Michael is there for her safety and so much more.

This was an interesting premise. I liked how the couple became known to each other through letters and then became married. Neither of them planned to meet the other and that is definitely different from other romance novels! Lol Michael, I believe had some high expectation of Cecilia but he was a discerning man and could tell by the tone of her letters that something was wrong. He was correct, of course, and there ended up being so much more wrong than he ever thought.

Cecilia was a bit of a control freak but after learning of her past it was the only way she felt she could be in charge of her fate, or so she thought. I loved how Michael made her look at life differently and made her talk things out with him. He was pretty relentless with her but it just worked.

The mystery part of the story was done well, I thought. It played a big part in matters but certainly wasn’t too much. I had the culprit figured out almost immediately but I’m not sure why I thought it was how it was. It wasn’t obvious, that’s for sure, but even though I knew whodunit it was still exciting to read when things came to a head.

I’ve read a couple of other books by Callen but I think this is my favorite so far. A nice romance, great family bonding and a good mystery all wrapped in to a great package.