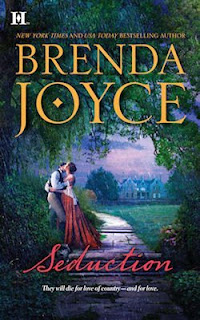 Dominic Paget, the earl of Bedford, will do anything to resume spying upon Britain’s enemies. Badly wounded, he is put will do anything in the care of a beautiful gentlewoman, Julianne Greystone, only to discover that her sympathies lie with his enemies. Yet he can’t help but seduce the woman who saved his life—hoping she never learns of his betrayal.Julianne is captivated by the wounded stranger she believes is a revolutionary hero. Until she discovers the truth: …her “hero” is the privileged earl of Bedford. Devastated and determined to forget him, Julianne travels to London. But when she finds herself in danger, it is Bedford who comes to the rescue. Now Julianne must navigate the intrigues of a perilous city, the wild yearnings of her own heart and the explosion of their passion….


He’s wealthy and titled and powerful, but he is lying nearly dead on Julianne’s guest bed in Cornwall, spouting French and hysterical over the blood and savagery of war that has overtaken France in the wake of the Revolution. Now Dominic wakens to find out that Julianne has Jacobin sympathies–she believes in the Revolution and the Equality, Brotherhood, and Liberty that the Revolution appears to stand for but has never made a reality. Yet Julianne is terribly naive, and even though she is warm hearted and generous, willing to nurse anyone back to health, the fact that this man appears to be a French army officer engages her interest even more. When he then professes to be just that–Charles Maurice–and a man who is determined to return to his country’s battlefields, their attraction and subsequent affair appears to be doomed.

Julianne is a foolish and inexperienced woman, one whose ideology has no basis in fact and whose loyalties to her beliefs leads her to engage in harmful activities, some of which put her life in danger and endangers those who she loves. This novel is set in the times just after the French Revolution and a time when Britain’s responses to the war were rooted in espionage as well as supplying money, men, and armaments. It is a love story between two people whose beliefs stand in the way of genuine connection but their attraction and their physical involvement keep them connected, even when it appears that they are working at cross purposes. It is also a book that deals with the use of power, both noble and illegitimate, as the aristocracy of Britain parties merrily on while hundreds of soldiers are dying for lack of food and the necessities of doing battle. Those supplies are controlled by political expediency, and this novel does not back away from the deep injury to men and nations that occurs when politics determines actions rather than justice and humane concerns.

Yet under it all this is a love story, one that is intense and full of deep emotion. The cast of characters tell their own story–those who flee from the destruction and evil suspicion of war, those who car little for what is going on just across the Channel, and those who have deep family roots in France and watch with dread and grief as the cherished places of youth and family are destroyed without a backward glance. As always, Brenda Joyce writes with passion and clarity, bringing in the realities of history and weaving her fictional tale within those happenings with skill. I really appreciated the efforts the author made to keep the story true to history as much as possible, thereby making the stories of her characters leap from the pages wrapped in the coverings of reality. It’s a terrific book and is a first in a new series set in this time frame. I enjoyed it very much.