Holly: Over the last few days, the blogging world has blown up over a plagiarism scandal. I first learned about it from the Smart Bitches website. After following the yellow link road, I was appalled and frustrated by what I was seeing. I’ll let you visit the SB site, or Grit and Glamour and Beautifully Invisible, for the full story. Here’s a quick summary:

Kristi of The Story Siren found blog posts written by Grit and Glamour and Beautifully Invisible, pasted them on her site, changed a few words here and there, then passed them off as her own. When confronted by them, she denied ever even visiting the sites in question. When presented with proof that she had, in fact, visited not only those sites but those particular posts, she then asked that the whole thing be kept quiet.

4 months later, when others in the book blogging community found her out and posted about it in public, she posted a non-apology on her site where she makes out like she did nothing wrong and is being persecuted unfairly. (I especially love the “In a way I feel as though it won’t matter what I say at this point. It seems that the verdict has been decided.”)

Then she “clarifies” by saying she may or may not have done anything wrong, but she’s very very sorry she upset the book blogging community. She doesn’t, however, say she’s sorry for actually plagiarizing. Just for upsetting the book bloggers.

You’ll notice those are screen caps from Google Cache? I had to use those because after all the double-speak and non-apologizing she did, she went and edited her post. This time she claims to have seen an idea and written her own take on it, which she didn’t know was plagiarism.

You notice the part I underlined. She went from bad to worse. Grit and Glamour, who has behaved with nothing but class throughout this whole thing, was prompted to write a rebuttal Clarification post. I can’t tell you how bothered I am that there was a need for that post to get written.The way Krisit’s fan and readers have rallied around her disturbs me. Not because I don’t think friends should be loyal, but because what she did is wrong. A real friend doesn’t try to make the victim look bad. A real friend says, “Bitch, you done screwed up. Apologize and make it right.”

All those commentors who are blaming Grit and Glamour and Beautifully Invisible, sending them hate mail, telling them they’re jealous and – this one really takes the cake – saying they should be grateful Kristi stole from them make me heartsick. You know who I blame for the attacks on G&G and BI? Kristi. If she had stood up and taken responsibility for her actions, if she had spoken out and owned her actions, the could have gone down a whole different way.

Rowena: I’ve never been one to voice my thoughts in public about the blog world scandals. In this case, I felt that keeping quiet just wasn’t in the cards for me. For those of you who don’t know, I run a YA book blog called The Book Scoop. One of the book blogs that I read everyday was The Story Siren. I read her blog because she’s one giant fountain of information on all things YA. I respected her as a person and I was a total fan of her blog.

When I logged into my email on Monday morning and saw the story that hit the Smart Bitches blog, I was shocked. Completely blown away. I read every single post that I could find and followed the yellow link road until I was completely up to speed on what was going on.

I followed the action throughout the entire day, waiting for a response from The Story Siren. I was interested in hearing what she had to say for herself because like her other fans, I kept wanting it to be one giant joke. The thing that really disappointed me was when I read this from Grit and Glamour’s original post about the plagiarism:

“In all honestly, I have never been to your blog or any of the blogs mentioned in this email until tonight when I cross referenced the posts that you had listed. I rarely if ever read blogs beyond the book blog community. But I could not agree more with your assessments of the posts. And I am sorry to say that I have no viable explanation. I even searched my web history to see if perhaps I had read the posts and had recalled them as I was writing my own.”

That was The Story Siren’s response to B and Vahni’s initial email, alerting her to their findings. That’s when things took an ugly turn for me because not only did she steal but she also lied. All respect, all admiration for everything she’s done for the YA book blogging community flew out the window. Because she got caught and instead of fessing up to her mistakes, she lied and then tried to hide the truth. 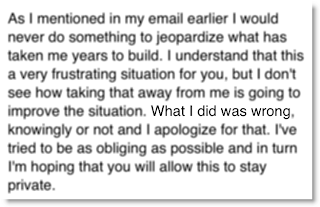 All of that still wasn’t enough for me to jump into the fray, but reading through her second “apology” and seeing each and every single comment that brushed off what she did as a mistake, and just all of the hand holding and there there-ing, was enough to boil my blood. There is nothing in this entire shitstorm for her to hold her head up about.

Let’s not forget that she lied, people. She said that she had never visited any of the sites when she most absolutely did visit those sites. Let’s not forget that just a few months ago, she was writing posts about how vile plagiarism is (H: interesting that she deleted that particular post, isn’t it?). She stole, she lied and she tried to bury the evidence.

How in the world can we trust anything that she says from here on out?

What really got my ass in gear to write this post was the treatment of the real victims in this case. I don’t give a good hot damn that they wrote the post that started this whole clusterfuck. Good for them. They had every right to be pissed and they had every right to post about it on THEIR blog. The Story Siren would have done the exact same thing (she did do the exact same thing) so the hypocrisy from her and her camp baffles the fuck out of me. It really pisses me off that the real victims here had to post their own clarification post. There shouldn’t have been a need for it. They didn’t do anything wrong.

The Story Siren is not the victim here, let’s not forget that.

To quote The Story Siren herself:

There is no excuse… “I didn’t know…. I didn’t mean to… I did it subconsciously.” No, you didn’t. You did know and you did mean to.

Holly’s note: Look at Rowena getting all ranty and using dirty words and stuff. I’m so proud. *sniff*

Retro-Review/Rant: Away from the Spotlig
17 Comments
Tagged: Other Bloggers, Plagiarism, Rants, Rants, Stupid People Piss Me Off, The Story Siren

17 responses to “The Story Siren is a Plagiarist, Not a Victim”