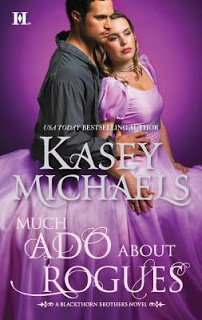 Who is the darkly handsome Don John “Black Jack” Blackthorn? With his air of mystery and menace, the whispers about him hint of highwayman or government agent or even dark prince. But no one knows what it is Black Jack does… or how dangerous he can truly be. Now Jack’s mentor has disappeared, and Jack must track him down before it’s too late. His unlikely help: the man’s daughter—the very woman Jack had once wooed and betrayed.
Lady Tess Fonteneau knows more about the fine art of clandestine activities—and about the mysterious Mr. Blackthorn—than he realizes. As their journey leads them on the adventure of a lifetime, their reunion is fraught with passion, high-stakes danger and the one twist of fate Jack never saw coming…
When Jack Blackthorn turned 18 his mother called her to her cottage that is situated on his father’s land and told him that he was a bastard. Well, he’d already that out as he looked absolutely nothing like his two brothers – who are also bastards. But Jack knew that even though his brothers, Puck and Beau, were bastards as well he took it to another level. At least his brothers had been born by their father and mother though they weren’t married. Jack was dark to their light and knew from a young age that he was not his father’s son. His mother, the consummate actress, told Jack that he would do much better to leave his home so that his father wouldn’t have to see him every day and know that Jack wasn’t his son.
Jack did go on his way and for years struggled to make ends meet becoming a pickpocket and at one time a highwayman until he met his savior, Sinjon Fonteneau. Sinjon became Jack’s teacher in all things that involved intrigue. Sure Sinjon had his own son and daughter but truly he saw Jack as becoming his predecessor. His predecessor in what you may ask. Well, in thievery. Sinjon loved things. He loved to steal ancient artifacts, hide them a way from his family and then just look at them. He loved things above all else and cared only for his own wants above those of his children, wife or anyone else.
During the time that Jack was with Sinjon he became enamored with Sinjon’s daughter, Tess, and they fell in love, or so they thought. When Tess’s brother is killed her father makes her believe it’s Jack’s fault and sends him away. That was four years ago and now Jack is back. Sinjon has disappeared and since Jack works for the Crown he was sent to bring the thief in. Jack is the perfect man to find him and bring him to justice as everything Jack learned about intrigue he learned from Sinjon. Tess as well was a student of her father’s and together they set out to find her father.
Most of the story is Jack and Tess trying to think like Sinjon who really has a twisted mind. The pair do get to know each other during that time and I loved that. I have to say that as much as I admire Kasey Michaels for the coming up with such a in depth way of thinking the story almost got bogged down as there were so many twists and turns to get through. It’s definitely not a simple book – it really puts your mind to work just trying to keep up.
The part I loved most was Jack and Tess and their reunion. It wasn’t always easy and they bugged the hell out of each other but there was love too. Tess actually said that she might have been in love with Jack before but she really didn’t have a clue who he was so was it really love? The author has Jack and Tess talking (can you imagine!?) and getting to know one another so in the end there were no secrets between them. I adored the communication in this book!
Another part of the story that is separate yet wholly involved during most of the book is that of Jack’s parentage and exactly what that meant to everyone involved: him, Tess, Sinjon, Jack’s brothers, the Marquess who raised Jack, Jack’s real father – just everyone. We finally get the nitty gritty on Jack and his brothers and that true story of their lives. It was pretty surprising in the end and I loved it.
In the end I really liked the series. The brothers were wonderful as were their wives. The stories were interesting and well written. Although I liked the first two books more than the last it would definitely be a series that I recommend.
Rating: 3.75 out of 5
Kasey Michaels

6 responses to “Review: Much Ado About Rogues by Kasey Michaels”