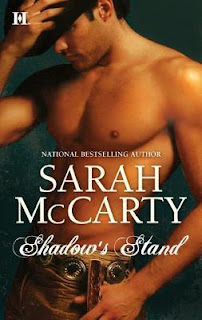 Shadow Ochoa is lying low in the western Kansas Territory, waiting for his fellow Texas Rangers—the Hell’s Eight brotherhood—to clear his name. That is, until he’s unjustly strung up for horse thieving…and pretty Fei Yen intervenes. Invoking a seldom-used law, the exotic lady prospector claims Shadow as her husband and rides off with the bridegroom shackled to her buckboard.

Savvy, fearless Fei is single-mindedly devoted to her hidden claim and all it promises: wealth, security and freedom. A husband is just a necessary inconvenience and a name on paper to hold the claim she cannot.

Shadow isn’t a man to take orders from anyone, especially from lovely Fei—except that the daily friction between them ignites into nightly blazes of all-consuming passion. Soon Shadow is dreaming a little himself: of the life they could have if only Fei could see past the lure of independence. If only bounty hunters weren’t closing in on him. If only he’s left standing when the impending showdown has ended.

He’s huge and he’s gorgeous, bearing the obvious appearance of one of mixed heritage–Native American and Mexican–and a man who has been defamed and insulted on that basis alone. Now he is dangling at the end of a rope for horse theft, when in deed he was retrieving his own horses. His only hope: if a woman wishing to marry him cuts him down. (Only in the American West, eh?) And that’s just what happens, when a woman who is half Chinese and half American decides that she needs him to protect her as she tries to work out a very complicated set of circumstances which involve, in part, freeing her Chinese cousin from an unprincipled man to whom Fei Yen’s father has sold her. (The American West wasn’t a good place for any women, it would seem.)

The continuing stories of Hell’s Eight, a finely tuned group of strong and independent warriors with the Texas Rangers are some of Sarah McCarty’s finest. Strong, Alpha-type men who have come through hell–thus the name–as their families were massacred and their community plundered, barely surviving and only with the help of a few individuals who reached out to them. Now they are each having to deal with their inner demons, and none more troubled that Michael (Shadow) Ochoa, a man of strange extremes and one who is not afraid to show strength one minute and tenderness the next to strangers, but is scared stiff of opening his heart to a little Chinese American woman who is wise beyond her years and who loves him without reserve. The only thing she insists on is complete honesty and her fearless pursuit of the real person who is Shadow Ochoa is almost his undoing and the death of the tenuous relationship they call a frontier marriage.

I have long delighted in Ms McCarty’s stories after having read one of her other American Western historical series and found her writing to be stimulating to the imagination and a treat for the brain, but also heart warming and resonating with genuine human qualities, with characters that speak of the best and worst that people can be. She does not paint the American West with a gilded brush, choosing to deal realistically with persons and situations that often existed outside both legal and moral boundaries which celebrating relationships that could only have existed where a greater amount of legal and moral freedom was to be found. Life was hard and it was even harder for women. Consider that a woman was of mixed race, and she was even more invisible and thought to be even less of a person of worth. Yet this story’s heroine knows how to deal with the issues she knows are hers, the burdens of society’s prejudice, and yet she is willing to beggar herself in many ways in order to bring the best to this man whose inner wounds have never turned him loose.

Lastly, the continuing story of the loyalty and friendship that binds Hells’ Eight together form a very important part of this story. For each of these men and especially for Shadow, their relationship, their support, their friendship and regard are his true “home.” And even in the darkest moments of this novel, the existence of those ties are what keep Shadow sane and possibly just a little hopeful. Best of all, each of these men can be trusted to do whatever it takes to do right by one another, even if that means telling truths that don’t want to be heard, crashing into situations where their presence can be unwanted, or dragging one of their compatriots out of circumstances where they wrongly choose to be. They are, in a word, true friends. As an ancient text proclaims: “Greater love has no man than this: that a man will lay down his life for a friend.” Such a love is at the heart of this story.