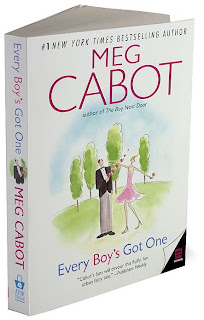 Rowena’s review of Every Boy’s Got One (Boys #3) by Meg Cabot.

When cartoonist Jane Harris’s best friend Holly, New York Journal art director, announces that she’s eloping to Italy with longtime doctor boyfriend Mark, and asks Jane to come along as her witness, Jane jumps at the chance, delighted by the prospect of her first ever trip to Europe.

What Jane doesn’t gamble on is Mark’s witness, New York Journal foreign affairs correspondent Cal Langdon. It’s hate at first sight for Jane and Cal, and neither is too happy at the prospect of sharing a villa with one another for a week —not even in the beautiful and picturesque Le Marche countryside.

But when Holly and Mark’s wedding plans hit a major snag that only Jane and Cal can repair, the two find themselves having to put aside their mutual dislike for one another in order to get their best friends on the road to wedded bliss, and end up on a road themselves —one neither of them ever expected….

This was one of those, I hate you but I’m falling for you and I don’t want to love you stories that I thought was just so cute. I finished it in one day and just enjoyed the heck out of it. It’s a really quick read, with no really steamy love scenes because this story is told through emails, blackberry IMing’s and PDA journal entries and travel diary entries.

I loved Cal, even when he was a psycho cell phone guy in the airport and a I do not believe in the institution of marriage jerk to Jane, Jane was funny, quirky and just cute all over. She reminded me of me, she remembers all sort of pop culture trivia, like only I would remember when Britney Spears filmed one of her commercials in Italy and talk of the oil problems in Saudi Arabia would bore me to death, much like it did for Jane, the cartoonist though that’s where our similiarities stop because she loves cats and I hate them.

But the story moved at a great pace, the characters were fantastic (though it appears we’ve read about these characters in Meg Cabot’s other books, The Boy Next Door and Boy Meets Girl)…Cal is one of John Trent’s journalist friends and Jane Harris used to work with her best friend, Holly at the NY Journal with Amy Jenkins and Dolly Vargaz (remember them, Izzy? They’re in this book) …Cal is a pimp too and I love it!

Read this book when you’re in the mood for something fun, cute and light, this is the book for you. I’m telling you, I heart Meg Cabot.

6 responses to “Review: Every Boy’s Got One by Meg Cabot.”