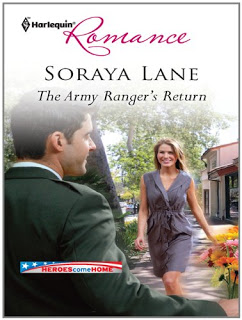 A soldier’s second chance…
As nervous as a teenager about to go on her first date, Jessica Mitchell waits for Special Forces Ranger Ryan McAdams—her best friend for the past year— whom she’s never met! They’ve been pen pals while Ryan was away fighting for their country and Jessica was secretly fighting her own demons back home.
She knows widower Ryan’s fears of returning to civilian life and his hopes of reconnecting with his son. Now she can’t wait to meet him face–to–face—to hear his voice and see his smile…
Jessica and Ryan have been pen pals for a while. Now Ryan is returning from the Army and wants to meet Jessica. Jessica is determined to think of Ryan as just a friend but they had become so very close via their letters to each other that it’s hard for her – especially after she sees him.
Once the couple meet in person they find yet another connection to each other. Though Ryan is leery to talk about the cancer that took his wife he knows that he needs to discuss it with Jessica as it affects his relationship with his son. Jessica is hiding something too. Though her feelings for Ryan grow daily as they spend time together she’s keeping from him the fact that she is only but a year out from surviving cancer. Jessica knows Ryan doesn’t want to deal with anything cancer related so she knows the relationship must end.
I read the blurb of this book and it looked really great but unfortunately it didn’t quite work for me in all ways.
The book starts out with Jessica moments away from meeting the man that she’s been a pen pal with. We don’t find out until much later in the book how they became pen pals but that was ok. When the two meet they don’t quite know how to act around each other. They are both attracted to the other but they had been so emotionally intimate during their letters to each other it was kind of awkward to finally meet in person. I personally thought that the meeting would be less awkward because they had shared so much in their letters but that wasn’t the case here.
The couple start spending time together but throughout it all there was just this stilted talk and well, I’ll say it again, awkwardness. To me they never seemed to just flow together and feel comfortable with each other – even when they were in bed together.
I really liked that Jessica helped Ryan work on the relationship with his son but I hated that she was keeping her cancer from him when she knew he felt so strongly about it. I perfectly understand her reasoning behind it, I really do and I felt for her wanting to be treated as someone who was “normal” in her eyes. But that just made me think she didn’t trust Ryan fully and what is love without trust? IDK, I really went back and forth with this story and in the end it was good but not great. An interesting way to pass a bit of time, but nothing that knocked my socks off. Some may feel differently but that’s how I felt about it.
Rating: 3 out of 5
Soraya Lane
Harlequin