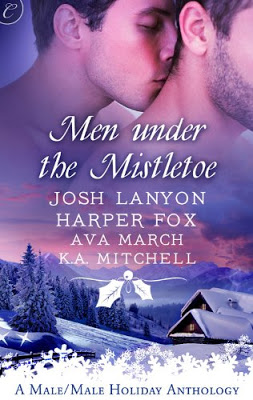 My True Love Gave to Me by Ava March

Alexander Norton loathes the festive season. The revelry of the ton is a reminder of Christmas four years ago, when his first love, Thomas Bennett, broke his heart and fled to New York without a word. So when he encounters Thomas at a holiday ball, Alexander is determined not to let on how much he still hurts.

Thomas has returned for one reason only: Alexander. Having finally come to terms with his forbidden desires, he will do whatever he must to convince Alexander to give their love another chance. But instead of the happy, carefree man Thomas once knew, Alexander is now hard and cynical. Saddened to know he’s to blame for the man’s bitterness, Thomas resolves to reignite the passion he knows lies hidden behind the wall of disdain…

Historical m/m romance is always a bit difficult for me to read. I think because I want the men to be together so badly and they can never be out and proud. They can never walk down the streets holding hands or ever show their affection in public and it just breaks my heart. This story is about two men who meet at Oxford and fall for each other. But Thomas is having a hard time dealing with the fact that he wants to be with a man. On a snowy Christmas Eve both Thomas and Alexander, who Thomas calls Sasha, head to Sasha’s father’s hunting lodge. Unfortunately things don’t go the way Sasha would like, Thomas leaves and Sasha is heartbroken.

Now Thomas is back after four years of completely ignoring Sasha and he wants him back. He will do anything to get his true love to take him back and he’s not above begging. Sasha, however, has turned into a brusque, cynical man and he’s not sure he wants to open himself up to that kind of hurt again.

This was just a heartwrenching story. Sasha’s heartbreak from losing Thomas was so hard to read although I completely understood Thomas’s fears it was still hard for me to read about his actions. When Thomas finally comes to terms about who he really is and his feelings for Sasha it’s four years later. I could understand Sasha’s hesitance completely as I would have been leery as well. The story was well written and really good.

Historian Gavin Lowden is in Northumberland on Christmas Eve for two reasons: to find evidence of a romantic bond between Arthur and Lancelot, and to finally tell his partner Piers that he loves him. Piers has promised to come clean with his conservative family and join Gavin for their first holiday as a couple, but at the last minute, he bails. Devastated, Gavin heads out onto the moors alone, just as snow begins to fall…

When Piers learns that Gavin has gone missing, he is desperate to find him. He knows now breaking up was a terrible mistake, and he’s ready to take the next step in their relationship—if it’s not already too late.

Gavin is so excited that his boyfriend Piers will be telling his parents about the fact that he is gay and then will then spend the holiday with him. After 3 years of spending it separately he wants nothing more than to be with Piers. But Piers, who is a devout Catholic, doesn’t hold up his end of the bargain. In fact not only does he not tell his family but he then calls Gavin and lets him know that he will be marrying Gwen a woman he had been engaged to prior.

In a fog from his heartbreak, Gavin heads off to check out a location near his hotel that supposedly has a connection with King Arthur. What he finds is a deep chamber and gets stuck. He’s hurt, not thinking clearly and isn’t dressed warmly enough. Luckily two rescue workers come to help. Artie and Lance not only eventually help Gavin out of the hole, they take him home and help him see some insights into himself – some he just didn’t want to hear. They also initiate him in sexual acts he had never before discovered.

When the morning comes Gavin finds Piers in front of Artie and Lance’s house ready to talk to him. The pair finally communicate everything that has been a problem for the past 3 years and become closer for it. But how does Gavin deal with his guilt over his liaison with Artie and Lance? And would Piers understand if he tells him.

This was a very well written story that had me guessing exactly what was going to happen until the end. I had some issue with Gavin falling into bed with Lance and Artie so soon after his break with Piers but eventually saw exactly what was happening and why. There was a strange twist in this novella that was unexpected but I really liked how it all ended up.

Growing up in rural Texas, Mitchell Evans’s ambition to be a dancer made him a target. Though he found success in New York City, Mitch is at a crossroads, and heads home for the first time in twelve years to figure things out. When what appears to be a reindeer jumps out in front of his car, he drives off the road and into the path of the one man he hoped to avoid.

The last person Texas Ranger Web Eisley expects to see four days before Christmas is his first love. He hasn’t seen Mitch since they quarreled over coming out to their friends and family years ago. Though he’s not in the closet now, Web has worked hard for the respect of his fellow officers, but he still regrets the loss of Mitch in his life. And his bed.

The attraction between them is as strong as ever, and it doesn’t take long for the men to pick up where they left off. But is love enough to keep Mitch in town in the New Year?

Mitch Evans is a famous ballet dancer who once was just a kid in small town rural Texas. When he lived in Texas he fell in love with Web Eisley but their thoughts about how their relationship should commence were not on the same wavelength. After a horrible argument with Web, Mitch went home and told his rancher father that he was gay. His father then punched him and kicked him out of the house. Mitch left and never looked back. Now his father has died and he’s gone back to his hometown to take care of legal details. While driving to his home he has an accident and who is there to help him pick up the pieces? Web Eisley.

Mitch is in a vulnerable place in his life with his work and his recent relationship but he knows that his feelings for Web are not just something he can ignore. Web finally came out to his family and friends and is more than happy to have Mitch back and is willing to take what he can from the man with the hope that their relationship can continue.

This was a very sweet story. I loved Mitch and Web both separately and apart. My complaint about this story was that it just wasn’t long enough! lol I wanted to read more about the two men and of course what happens after they finally get together (and no that’s not a spoiler because come on, you know there’s gonna be a HEA!)

The Christmas Proposition by K.A. Mitchell

It’s Christmas in Epiphany, Pennsylvania—the busiest time of year for Mel Halner. But running the family Christmas tree farm has worn down his love for the happiest season of all, and lately Mel’s been wondering what if he’d said yes to a ticket out of town with millionaire Bryce Campion three years ago.

Bryce isn’t used to people saying no to him, and he can’t forget Mel or their brief but sizzling affair. He might not have been offering forever, but Bryce can’t understand a guy as sexy and smart as Mel choosing to stay rooted on the family farm over enjoying the high life with him. He’s determined to make Mel see what he’s missed out on the first chance he gets.

Mel Halner hasn’t ever been anywhere. He grew up in Epiphany, Pennsylvania and has worked at his parents Christmas Tree farm since he could remember. Two years ago he hooked up with Bryce Campion and thought that it might be something special. Back then Bryce asked, off handedly, if Mel was willing to leave town with him since he was the owner of a huge corporation. Both the misunderstanding of the sincerity of Bryce’s request as well as fear of the unknown had Mel staying put. Bryce left without a word and Mel hadn’t heard from him since.

Now Bryce is back in town and they’ve taken up where they left off but Mel still has issues and he’s not sure exactly where Bryce wants the relationship to go. On top of that Mel’s trying to plan a wedding at the last minute for his best friend. Will the stress never end?

This was a very hot story with lots of man lovin. I love Mitchell’s work and this was no different. As with all the stories in this anthology I wished for more with this story. More in depth thought from both Mel and Bryce would have been wonderful. Mel had such issues – some understandable, some ridiculous, imho, and knowing more about those would have been great. Bryce moved the relationship quickly and wasn’t very forthcoming about his thoughts and feelings but he thought he was relaying those in action and deed – which is great but sometime you just need to have it said out loud! Men! lol

Overall all the stories in this Christmas anthology were very good and not to be missed.