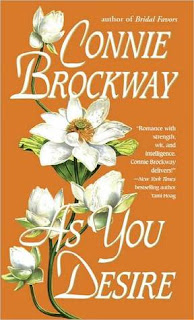 Ames’ review of As You Desire by Connie Brockway.

He galloped across the midnight-shrouded landscape, racing toward her on his pure white steed. Her destiny…In her wildest fantasies Desdemona Carlisle could not have conjured a more dashing savior, and this was real. But an unlikelier hero was hard to find. Harry Braxton was a rouge, a scoundrel, and a born opportunist who had already broken her heart once. How could she ever trust a notorious rake who came with a warning: lover, beware…

With her bronze-gold hair and quicksilver grace, the sloe-eyed beauty was every man’s desire and one man’s sole passion. But the secret that had made Harry an exile also made it impossible for him to offer Desdemona more that friendship. Until his aristocratic cousin laid siege to Desdemona’s heart and Harry, damning the consequences, vowed to do anything, give anything, to claim her for him own…

I received a copy of The Other Guy’s Bride for review and I figured I’d read the book it’s connected to first.

Desdemona is an expert on ancient spoken languages. Growing up, her academically inclined parents dragged her around to different conferences. So Desdemona did not have a typical childhood. When she was 15, her parents died in an accident and she was sent to her only living relative, her grandfather, who was in Egypt. Dizzy’s grandfather is kind of living in exile in Egypt, where he collects ancient Egyptian artifacts. Dizzy takes on translation jobs to help make ends meet for them. Dizzy is quite comfortable in Egypt but her dream was always to return to England and marry and live in a small quaint house with green hills all around – the exact opposite of what she’s got in Egypt.

Harry is Desdemona’s rascal friend who broke her heart when she was younger (he rejected her). But that was quite a few years ago and they’re friends now. Except Harry loves Desdemona. But he believes he’s no good for her because he has dyslexia (although it wasn’t called that back then) and he would hate to see pity in eyes if she ever found out he couldn’t read.

When Harry’s cousin, a nobleman, comes to Egypt to see him, Desdemona takes one look at him and thinks about all the heroes from her romances. He is equally entranced by what he sees as an English rose in the middle of the desert. Harry hates it but figures his cousin can make Dizzy happy by taking her back to England. Except as Dizzy and his cousin get to know each other more, Harry comes to realize that there’s no way he’s going to let her go.

*sigh* I thought this book was so quirky and cute. First of all, the cast of characters are great. Dizzy and her grandfather, Harry who is not always worried about providence of his artifacts and is quite the rascal, Dizzy’s servants, and the other expats that make up their society in Egypt. With such a setting as Egypt, the characters aren’t as restrained and hewn in by societal standards. Something that becomes apparent when Harry’s cousin joins their ranks.

At the center of this story though is Harry and Dizzy. And let me tell you, I loved these two characters, especially together. Everyone knows Harry wants Dizzy, but she’s so blind because of what happened between them before. So he’s been relegated to friendship status and that’s where he is. But Harry teases her and accepts her for who she is – and since her grandfather raised her, she’s not exactly a shining example of the perfect Englishwoman. LOL She’s independent, smart and someone others go to to get things done.

Throw in my love of archaeology and ancient Egypt and I was just tickled by this book. I read that you don’t have to read this book to enjoy The Other Guy’s Bride and that’s probably true, but I recommend you read this one for pure enjoyment alone.

This book is available from Dell. You can buy it here in e-format.

One response to “Guest Review: As You Desire by Connie Brockway”