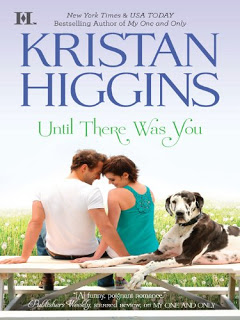 Posey Osterhagen can’t complain. She owns a successful architectural salvaging company, she’s surrounded by her lovable, if off-center, family and she has a boyfriend—sort of. Still, something’s missing. Something tall, brooding and criminally good-looking…something like Liam Murphy.

When Posey was sixteen, the bad boy of Bellsford, New Hampshire, broke her heart. But now he’s back, sending Posey’s traitorous schoolgirl heart into overdrive once again. She should be giving him a wide berth, but it seems fate has other ideas….

Posey lives in a small town in New Hampshire. She’s always been a small skinny kid with a metabolism that forces her to eat 6 times a day. (Oh, if only!) When she was in high school she was made fun of for her weight and it really hurt her self-esteem. When Liam Murphy came to town she was smitten from day one. Liam was the bad boy that she never knew she always wanted. She looked for opportunities to be near him even though she was usually too shy to actually speak to him. Liam worked in her parents’ German restaurant and even though Posey didn’t talk much to him.

Liam was a complete womanizer and wasn’t afraid to go through women who threw themselves at him. But when he saw Emma Tate he was dumbstruck and it was love at first sight. Emma was sweet and kind and her parents hated Liam but they just kept dating.

Emma took Posey under her wing at one point when Posey was a sophomore and got her a date for the prom. Little did Emma know that the date himself was a complete ass and made the night a living hell for Posey. That, along with some extremely hurtful words toward her that Posey overheard coming from Liam, the night was a nightmare.

Now it’s 15 years later and when Liam moves back to Bellsford with his 15 year old daughter by Emma, Posey is again crushing on the man. She tells herself that she shouldn’t be but when Liam asks her out she immediately says yes.

The two start a relationship of sorts and Posey is head over heels. But Liam doesn’t know what he wants and is afraid of the commitment. The man has definite issues with giving in to his feelings and he wants to do what’s best for his daughter who always comes first with him. Can the two find a way to meet in the middle and make the relationship work?

I really have liked all of the books that I’ve read by Kristan Higgins and this one was no different. Her characters, sense of family and of course the romances are always what makes the books for me. This one was no different as we had Liam looking out for his daughter and trying to be a great father (which while it was a little over the top still made me laugh) and Posey’s issues with her parents – who adopted her.

While I really loved all of that I did have an issue with Posey and her forgiveness of Liam. When Liam explained why he had said the hurtful words about her so long ago I totally accepted that. But the way that he treated her now was the issue I had. I understood why he did it but it just didn’t set well in my mind. I still really liked him but I thought he needed to get down on his knees and beg a little more before Posey accepted him.

That being said the story has some great characters in it. Liam and Posey of course, Posey’s brother-in-law Jon who is married to her brother Henry (who cracked me up!) and of course Posey’s best friend Kate (who I wish we would have seen more of). There was another sub-story about Posey’s cousin Gretchen but I wasn’t as fond of that one as I just didn’t feel it added too much to the story.

6 responses to “Review: Until There Was You by Kristan Higgins”