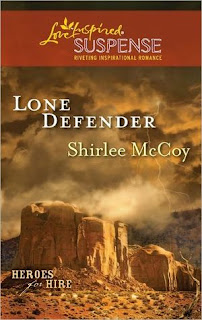 When private investigator Skylar Grady finds herself abandoned in the Arizona desert, she knows two things. First, her “simple” case tracking a deadbeat dad has someone spooked. Second—that someone will kill to keep her off the trail. So even when her rescuer, former patrol agent Jonas Sampson, wants her to leave, Skylar knows she’s staying. No one gets rid of her that easily. If Jonas wants her safe, then he’ll have to stick by her side. But her new partner is a mystery, too—one Skylar will risk her heart to solve.
From time to time I am pleased to encounter a novel that is not about sex per se but is really about relationships that grow out of the harsh realities of living and the push/pull of friendship.  As a part of the Heroes for Hire series, Harlequin, under their Love Inspired imprint, have given romance fans just such a novel.  It is a story of two people who have encountered perhaps the worst that life could throw at them, and yet in the midst of all the pain and regret, they discover depths of character in themselves and each other.

After finishing the novel, I came to believe that the entire initial scenario in the Arizona desert was really a kind of metaphor for the kind of life Skylar and Jonas had individually endured.  Finding oneself alone without water or resources in an alien environment like the Arizona desert, knowing that death was there, just around the next boulder or ridge, had to have seemed familiar to both these people who were living out an emotional desert existence within themselves.  That they survived was a mute testimony to the determination that had brought each of them to this time in their life, not expecting much of anything different in the months and years ahead.  Just get through one more day — a mantra that seems to have supported both Skylar and Jonas.

Yet throughout their story is woven their individual and collective struggle to see beyond the devastation.  Each had to come face to face with their need to trust again, their need to face their own fears of the future and especially of emotional involvement that would leave them once again vulnerable, and to face fully the claims their faith had upon them.  While this story is not “religious” in nature, it doesn’t back away from the fact that both these people had lost a part of their faith when they lost a part of themselves in the past.  As a part of their life picture, faith was important to them.  Whether or not that may be true in the reader’s frame of reference, it is still true for many people whose lives mirror the challenges these characters faced.  Regaining that lost sense of purpose in life meant regaining the robust nature of that lost faith.

I have not previously read any of Ms  McCoy’s work, but I was impressed with her storytelling abilities, with her excellent use of language, the consistent flow of the story, and the up-front inclusion of the faith factor in her story.  Yet these two people struggled mightily with their own issues even while trying to sort out their relationship with one another.  Wounds as deep as theirs just don’t heal overnight.  Both were so fearful of being vulnerable in the future that they almost lost their ability to love.  Ms McCoy seems determined to be realistic, open in crafting her characters, not backing away from the pain but not allowing it to overcome the story either.  Certainly this novel reveals a significant writing talent.


This book is available from Love Inspired. You can buy it here or here in e-format.