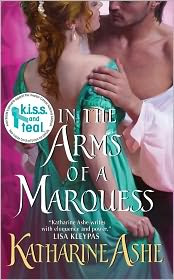 Rowena’s review of In the Arms of a Marquess by Katharine Ashe.

She had never forgotten him…

Miss Octavia Pierce is witty, well off, and shockingly unwed. Still, she is far too successful in society to remain on the shelf forever, and her family has hopes that Octavia will finally make the perfect match.

What they do not know is that years earlier Octavia was scandalously tempted by the one man capable of sweeping her off her feet—the man now known as the Marquess of Doreé. A third son, never meant to inherit, Lord Ben Doreé has abandoned his past and grown accustomed to his illustrious new position of wealth and power. But he has never forgotten Octavia, and now she desperately needs his help in a most dangerous, clandestine matter. Although she claims she has put the memories of the passion they shared behind her, Ben is determined to once again have her in his arms—and in his bed.

I can’t remember if I’ve read anything by this author but the blurb for this book seemed interesting so I picked it up. The book itself is well written and Ms. Ashe does a wonderful job of sucking me in but there were a few things that I couldn’t get behind to make me fall in love with this book, as I was hoping.

First off, this book follows Ben and Octavia as they fumble their way to their happy ending. Their story is a long time coming too as it started seven years ago with the two of them falling in love with each other and then misunderstandings and secrets got in the way and did a whole lot of damage which I personally thought was a bit much, but that’s just me. You see, Octavia spent many years in India, living with her uncle and then with her sister and brother in law. In that time, she met and fell in love with Ben and he with her but because of prejudices on her side and stoic pride on his side, their love wasn’t enough for the both of them.

The way that these two fell in love was cute. He was infatuated and showed up everywhere she was so that he could get to know her. She looked forward to bumping into him at the marketplace so that she could get to know him and I found myself smiling along with the both of them as they’re remembering how things used to be. The book takes place in the present (well, you know what I mean) time but these two actually met seven years ago before he left and broke her heart.

There’s a lot going on aside from the romance between Ben and Octavia. There’s the mystery behind Marcus Crispin’s need to marry Octavia and then there’s that hair that was found on the ship that Ben purchased and just a whole lot of other things popping off that you find yourself wondering about and all is found out in the end but the getting there took some time.

My main complaint with this book was that there were far too many secrets, too many misunderstandings and it all made me dizzy. I spent part of the book confused because I couldn’t keep all of the secrets and who had the secrets straight in my head and while that would usually be enough to keep me turning the pages, I found myself getting annoyed. The secrets and withholding that annoyed me the most were the ones between Ben and Octavia. For seven years, the two of them were heartbroken over stuff that could have been cleared up had they just opened their mouths and asked the questions they so desperately needed to ask. I wanted to smack some sense into Ben and smack Octavia a time or two just because they needed it. 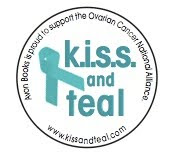 Aside from all of the secret keeping, the book is actually interesting and the characters are charming which is what, in the end, saved this book from being a DNF for me. I’m glad that I read the book and I’m looking forward to more from this author so it’s all good in the hood. Aside from all of the secrets and misunderstandings- this book was a cute, historical read which is saying something because I’m not a fan of books set in India and for part of this book, they’re living in India and the descriptions and the local culture was very interesting.