I hope you all had a great weekend and for those of you in the US I hope you’re having a nice extra day off today.  I know I am!

Saturday my mom Judith and I traveled to Holly’s house for a special blogger get together.  You see Ames was visiting from Canada and we couldn’t pass up the opportunity to see her while she was here.  Rosie, Holly, Renee, Wendy, Judith, Lori, Rowena and Ames and I had a great time having lunch together (Nikki had to bow out at the last minute due to work – boo hoo) and then all of us but Rosie went over to Holly’s house to talk for hours and invade her books! lol  I know that we took a group picture but I don’t know who’s camera it was on so I’ll post it when I track them down.

Then Sunday after church we had a little fiesta and had a waterslide (at the church).  It was great fun and my little one was just going nuts on it.  Here she is practically falling out of the darned thing. lol (sorry it’s a little fuzzy since I took it with my phone) 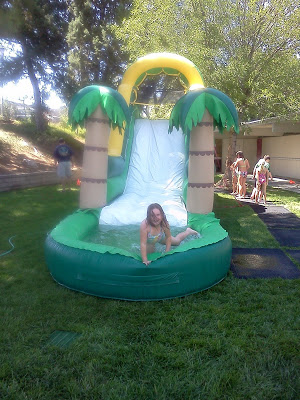 Today we don’t have much planned.  I know I plan to do the laundry that I avoided yesterday. 🙂

On to what I read last week:

I started the week with The Salisbury Key by Harper Fox.  This was a book that I really liked but had some issues with.  I did love the writing though so I had some problems rating it at first.  You can read my review here for further thoughts. 4 out of 5

Next was A Midnight Dance by Lila DiPasqua.  This is a French historical romance based on the Cinderella fairy tale but it wasn’t like any Cinderella story I’d ever read.  It was pretty dark yet a really great romance.  The story is about a girl who was born to wealth but then lost everything.  She’s trying to keep her family from starving and decides to steal silver from a band of privateers.  The privateers are lead by the man she has been in love with for years but that doesn’t stop her.  The story turns in a different direction than what I expected but it was really good and definitely worth the read. 4.25 out of 5 (read for The Book Binge)

Elizabeth, the Enchantress by Lavinia Kent was next and this novella was just as good as the previous 3 novella’s in the series. This story had Elizabeth’s husband William returning home after 4 years.  William is clueless as to what happened after he left on his travels just a month after he married Elizabeth.  Can William make up for his mistakes and can Elizabeth forgive him?  You can read my mini review here. 4 out of 5

Good Girls Don’t by Victoria Dahl was my next read.  This is book one in the Donovan Brewery series about the 3 Donovan children.  This was Tessa’s story.  Tessa has issues but she’s not afraid to go after what she wants…which is to play with Luke Asher. But Tessa has some really huge problems to work through, inner problems with herself and those with her brothers.  Can a romance survive it?  You can read my review here for more info. 4 out of 5

Last on the list was Spell Bound by Kelley Armstrong.  This book takes up a day after the last book, Waking the Witch, left off.  Savannah has just investigated murders and being poisoned and now her powers are gone.  She’s trying to find out what happened as well and trying to figure what’s up with a group of supernaturals who want to come out and rule the world.  There’s a whole lot going on and the book was left without a conclusion but it was an enjoyable book that was well written, as usual.  4 out of 5 (read for The Book Binge)