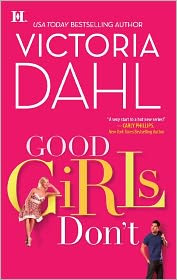 Too much of a good thing…

With her sun-kissed hair and sparkling green eyes, Tessa Donovan looks more like the girl next door than a businesswoman—or a heartbreaker. Which may explain why Detective Luke Asher barely notices her when he arrives to investigate a break-in at her family’s brewery. He’s got his own problems—starting with the fact that his partner, Simone, is pregnant and everyone thinks he’s the father.

Tessa has her hands full, too. Her brother’s playboy ways may be threatening the business, and the tension could tear her tight-knit family apart. In fact, the only thing that could unite the Donovan boys is seeing a man come after their baby” sister. Especially a man like Luke Asher. But Tessa sees past the rumors to the man beneath. He’s not who people think he is—and neither is she.

Back in April at the RT Convention, I met Victoria Dahl (I even took a picture with her but my phone got washed in the toilet thanks to my one year old nephew Luke so the picture is gone from my life) and she talked about her new contemporary series that takes place in Colorado with a microbrewery in the background with brothers and I immediately wanted to read this book so when this book came up for review, I had to have it.

This book was such a cute read that I devoured it in one sitting. I opened the book and started reading and kept right on reading (and laughing) until I reached the end. I was annoyed with myself that I read the book so fast because when all was said and done, I wasn’t ready to party from the Donovan’s.

Tessa Donovan is the younger sister of Eric and Jamie Donovan. They trio lost both of their parents when Tessa was just fourteen years old and even since, Eric has taken care of both Jamie and Tessa. Now, Tessa is a fully grown young woman of 27 now but you wouldn’t be able to tell that from the way that Eric and Jamie treat her. They treat her like she’s still fourteen and I found that equal parts exasperating and sweet.

The story starts off with a robbery at the family brewery that Eric has been running with the help of Jamie and Tessa. Someone came in and stole some computers and that’s it. They bypassed the bar alarm so the cops are trying to track down just who the heck is going around to local businesses and ripping off computer equipment.

On the job is Detective Luke Asher and his partner, Simone, who is seven months pregnant. Everyone and their mom thinks that Luke is the father and he lets everyone think it because Simone isn’t setting anyone straight and watching the relationship that Luke has with Simone frustrate him with her continued silence was interesting. It’s a male and female friendship and neither one of them was gay so it made for an interesting addition to the story. I loved that a man and a woman could be friends without being anything else so it was a refreshing change from the norm. I loved seeing Luke care enough about Simone to want to be there for her and the baby since there didn’t seem to be a father in the picture.

As much as Luke cares for Simone, it’s Tessa Donovan that has gotten under his skin. Luke went to college with her older brother, Jamie and Jamie knows that Luke isn’t a choir boy but the boy Luke was when he was in college is so different from the man he is today. Luke Asher, the college boy partied and got his freak on whenever he wanted and with whoever he wanted but Luke Asher, the grown man was married and had his heart broken. Rumors swirled about him and instead of setting everyone straight, he let them think what they wanted to think because it meant that he didn’t have to talk about the truth.

Tessa has been checking Luke out since he came to the bar to investigate the robbery. She liked what she saw and is one of those girls that sees something she wants and goes right up and gets it. She’s confident when it comes to men and she enjoys their company but she comes with baggage in the form of two over protective, meddling brothers who are gossip hounds…who thinks she’s still a virgin. Oh goodness, the way that both Eric and Jamie are portrayed in this book in the beginning made me laugh. They believe the worst in everyone (including each other) and the outrageous lies they told Tessa (that they totally thought was true) had me at times wanting to strangle them for believing everything that they’re told as if it’s the gospel’s truth.

Tessa goes after Luke and while he only begrudgingly puts up a fight, eventually they hit the sack. When that happens, Victoria Dahl puts on a show. This book is one of the more steamier reads that I’ve read (which made me feel like a total prude) in a while but I ate it all up. Luke Asher is swoonworthy in the sack and I enjoyed those scenes. Usually, I’m shrugging my shoulders, not really caring but Victoria Dahl can sure write her way around a love scene that didn’t have me wondering if it would hurt or anything. It was just fun.

The relationship that blossomed between Luke and Tessa was fun to watch and getting to know the others in the story from Simone to Eric and Jamie was fun too. I’m anxious for more from this series and am delighted that Jamie’s book isn’t too long of a wait. Of the three Donovan, I’m anxious to get to know Eric more. There’s something about him that just has me all curious…plus, he’s sexy.

This book is easy to fall into, there’s nothing too complicated about the plot, the characters leap right off the pages and it was an enjoyable way to spend a few hours of the weekend. It’d be a great beach read and if you’re a fan of contemporary romance than you should definitely pick this up. This book kicks off the start of a fun contemporary series and I’m thirsty for more.