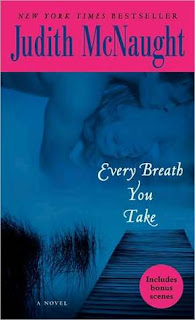 Holly‘s review of Every Breath You Take

Unforgettable characters, sizzling romance, and riveting suspense: These are the trademarks of beloved author Judith McNaught. With millions of devoted fans and ten New York Times bestsellers to date, McNaught is a writer whose work just gets better with each new novel–and Every Breath You Take is the book readers have been waiting for. Returning to the lavish Chicago setting of her popular novel Paradise, and revisiting some of that book’s characters as well, this story will captivate in inimitable Judith McNaught style.

High atop a snow-covered hill, the stately old Wyatt mansion is perched like a crown, its stone spires pointing upward, its stained glass windows glowing like colorful jewels. Such opulence means success and, surely, happiness. But on the eve of wealthy philanthropist Cecil Wyatt’s eightieth birthday, all the money in the world won’t bring back his missing grandson, William Wyatt. The only thing for certain: Foul play was involved.

The family, the police, the media–all have tried in vain to discover the young man’s fate. Now suspicion has turned shockingly toward William’s own half-brother, the rather distant and enigmatic Mitchell Wyatt.

Kate Donovan never dreamed that a chance romantic encounter on a tropical island paradise would tag her as a suspect in a high-society murder case. But after Kate tangles with the darkly charismatic Mitchell Wyatt, she finds herself cast in a shadow of guilt and mistrust. As the Chicago police tighten their net, it will take all of Kate’s ingenuity to clear her name. With her calm, cool wit, and the help of a man who may or may not be a dangerous catch, Kate vows to claim the life and love she desires.

I’ve been in a nasty reading funk. So what do I do to get myself out of it? Re-read!

It’s been years since I read this book. I recall liking it the first time around, but not loving it. I think that’s because I read the hardcover version, which is missing some key scenes. The paperback, which I always enjoy more, has quite a few deleted scenes along with some bonus material. If you’re going to read it, I highly recommend you read the paperback. The blurb is misleading.

Kate is dealing with the death of her father and trying to figure out how to take over running his restaurant. When her fiance suggests a romantic getaway she agrees – reluctantly. At the last minute he’s called away and she goes on her own, expecting that he’ll join her. He keeps putting her off, and she’s forced to realize that there isn’t much between them except mutual respect. She doesn’t love him, and she’s pretty sure he doesn’t love her either. She wrestles with the decisions, but decides she’ll break up with him when she gets home. In the meantime she meets Mitchell Wyatt. He’s suave, debonair and sweeps her off her feet.

Mitchell isn’t interested in starting a great love affair. A one night stand with a beautiful, obviously attached, woman is one thing. But it isn’t long before he realizes there’s more to Kate than meets the eye. He can’t help but be drawn to her. For the next week they get to know each other and slowly fall in love.

But circumstances are against them. In the end they each head back to the states with the wrong opinion of the other. Neither is willing to admit it, but both are devastated. Kate more so than Mitchell, because she knows something he doesn’t..she’s carrying his child.

Now she needs him to help her protect their son..the son she never told him about. But Mitchell is still under suspicion for the death of his half-brother, and there are years of old hurts between them.

As with all McNaught novels, this is angsty and filled with misunderstandings and miscommunications. And as with all her other novels, McNaught makes it work. Though Kate is just this side of too nice and Mitchell just this side of an alpha-hole, I really enjoyed it. Kate’s too sweet attitude works because she grows and changes as the novel progresses. Mitchell’s attitude also works based on his childhood and current family problems.

The hardcover version of this novel doesn’t do justice to the hurts they both suffered, but the paperback has just enough added content to make it believable. I’m glad I re-read it. I wish she’d release her next book already.

This book is available from Ballantine. You can buy it here

2 responses to “Review: Every Breath You Take by Judith McNaught”