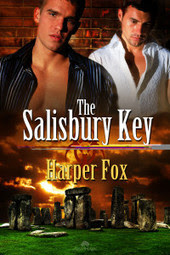 Can love repair a shattered life in time to save the world?

Daniel Logan is on a lonely quest to find out what drove his lover, a wealthy, respected archaeologist, to take his own life. The answer—the elusive “key” for which Jason was desperately searching—lies somewhere on a dangerous and deadly section of Salisbury Plain.

The only way to gain access, though, is to allow an army explosives expert to help him navigate the bomb-riddled military zone. A man he met once more than three years ago, who is even more serious and enigmatic than before.

Lieutenant Rayne has better things to do than risk his life protecting a scientist on an apparent suicide mission. Like get back to Iraq and prove he will never again miss another roadside bomb. Yet as he helps Dan uncover the truth, an attraction neither man is in the mood for springs up against their will. And stirs up the nervous attention of powerfully placed people—military and academic alike.

First in conflict, then in passion, Rayne and Dan are drawn together in a relationship as rocky and complicated as the ancient land they search. Where every step leads them closer to a terrible legacy written in death…

Daniel is a post grad in love with his tutor. His tutor, Jason, is thirty years older than he but he doesn’t care he wants him no matter what. Daniel gets his wish and not only do they make love but they become partners for the next three years…until Jason kills himself.

Daniel is devastated at the loss and doesn’t deal with it well; at first believing that Jason is just away on a trip and then by ignoring the situation. A helper from an unlikely source finally gets Daniels butt in gear and makes him face facts and plan Jason’s funeral.

You see one thing that Jason had always longed for was to be able to dig (as he was an archaeologist) on the Salisbury Plain. He believed that it held “the key” to a discovery that would change thoughts about past civilizations in the past. Not long after Jason dies Daniel gets access to this Plain. Knowing how much it meant to his lover Daniel goes ahead with what Jason would have wanted. He is assigned Lt. Rayne who is a demolition expert to help him in the Plain because there are mines that have not been set off. After some time together and a near death explosion, Rayne is the one that shows at Daniels house and forces him to face facts. But while he’s there the two end up having sex.

Daniel is disgusted with himself and with Rayne. It certainly doesn’t stop him from seeing Rayne again, despite the disgust and disappointment that is pointed his way from his co-workers. With a map that Daniel receives from Jason’s solicitor he and Rayne try to discover what Jason was hiding from his past and what he was now trying to tell him from the grave.

I gotta admit that as much as I liked this book I really had a hard time with it. First of all I really didn’t care for Jason all that much. I think he truly loved Daniel but was controlling in a way that very much bothered me. The fact that Daniel allowed himself to be somewhat molded really didn’t endear him to me much either. I fully understood Daniel’s devastation at Jason’s death but yet…he let Rayne into his life so quickly that it really threw me. Of course Rayne was so good for Daniel and their relationship so sweet that I had a hard time keeping up my ire.

The mystery portion of the book was a bit too easily solved but it was definitely interesting to read. The fact that the mystery brought Rayne and his brother closer together made me happy was done quite well. I loved see the family reunion.

So how do I rate this? I don’t have a clue! I didn’t doubt that Daniel loved Jason but I didn’t see them together for forever. I think I would have liked to have seen the sexual part of Daniel and Rayne’s relationship wait a bit longer but then the story wouldn’t have worked quite the same way, would it have?

Though I didn’t care for all parts or characters in the story it made me think about it long after I finished the book…and that’s always a good thing. I really liked Fox’s writing (both in this book and in the one other novella I’ve read of hers) and that amps up the rating as well. I think I’m going to have to go with a “very good” on this one and call it a day. I think you should read it and make your own decisions – let me know what you think after you finish.

9 responses to “Review: The Salisbury Key by Harper Fox”