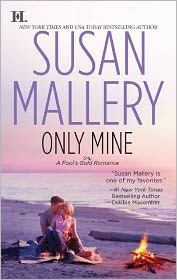 Rowena’s review of Only Mine by Susan Mallery.

Her town’s lack of men may make headlines, but it isn’t news to Dakota Hendrix. The beautiful blonde has bigger problems to deal with, such as overseeing the romance reality competition filming in Fool’s Gold. Screening eligible bachelors is a difficult enough task, but Dakota hits an unexpected snag when a sexy stranger comes to town.
Finn Anderssen will do anything to keep his twin brothers — the perfect contestants — off the show. Despite Dakota’s better judgment, she finds herself drawn to the mysterious outsider. Like her, Finn knows about heartbreak and how a family can fall apart, so she doesn’t dare to hope for anything more than a fling. After all, even in the Land of Happy Endings, finding true love is never as easy as it looks on TV.

I can’t believe we’re already at Book 5 in the Fool’s Gold series. Susan Mallery wrote another enjoyable story about the small town that I’ve come to love to bits and pieces. This story starts off the three books that will hit us this year, three books for three sisters. Ethan from Almost Perfect’s sisters. The triplets finally get their happily ever afters and first up is Dakota. If you remember, Dakota is the sister that works with Raoul from Finding Perfect at the camp that Raoul started in Fool’s Gold.

Dakota has been roped into the town’s reality show and she’s not very happy about it since she has better things to do than babysit a bunch of Hollywood wannabe’s and make sure that the producers and director’s of the show don’t paint Fool’s Gold in a bad light. While on the job, she meets Finn Anderssen. Finn is not happy about being in Fool’s Gold because his twin brothers decided to drop out of college one semester shy of graduating and pursue a career in Hollywood by way of trying out for the reality show, True Love or Fool’s Gold? After Finn’s parents died when the boys were just about thirteen, Finn has been their primary guardian and step in parent. He’s done everything he could to do right by these boys and he’s pissed to high heaven that they would throw their college educations away for some stupid reality show.

What’s a pissed off parent to do when their kids run off to do some idiotic thing? Run after them of course. That’s why Finn finds himself in Fool’s Gold. He’s trying to get his brothers to come back home, finish college and then, only then will he let the reigns go. Only problem is, they won’t budge. Sasha and Stephen are determined to stay in Fool’s Gold and there’s nothing Finn can do about it.

Except stay with them, of course. So he does and while he’s staying in Fool’s Gold, he gets close to Dakota Hendrix. Dakota was struck with some bad news a few years ago and in just a moment, all of her dreams about becoming a mother are flushed down the toilet by the news that there is a one in a million chance of her ever having kids. After coming to terms with this, Dakota grieves for a little bit but decides to move on with her life and looks into adopting her own kid. Someone who needs her just as much as she needs them.

While all of this is in motion, Dakota finds herself getting closer and closer to a man who is determined to butt his nose into his fully grown brothers lives. Before she knows whats what, they’re dating and she likes it. She likes him but as much as she likes him, she knows that nothing much could come of them seeing since he won’t be sticking around after the show wraps because he’s got a life in South Salmon, Alaska that he’s determined to get back to. Pushing those thoughts aside, she lets herself live in the moment.

Mallery does a great job of sucking you right back into Fool’s Gold. While I enjoyed seeing everyone again and appreciated that the recurring characters didn’t steal Finn and Dakota’s thunder, this book didn’t grab me the way that the previous books did. I still enjoyed it but I’m not sure if all of the pregnancies that popped up in this book took away some of my enjoyment. I mean, does everyone need to be in a mad rush to get pregnant and have families? Everyone is pregnant in this book and then the whole thing with Dakota, I kept thinking, “Really? Did that really need to happen for her to have her happily ever after?” I guess, I just ODed on babies but other than that, the book was enjoyable.

Finn was a stand up hero and I liked how everything with his brothers wrapped up. I thought Finn was a bonehead in most of the beginning because I couldn’t believe how unreasonable (no matter how valid his reasons were) he was being with his brothers. I got why he was there but his whole run their lives mentality he had, made me rolls my eyes across the room. I enjoyed the secondary romance between Stephen and Aurelia though. That was a cute addition and I enjoyed seeing the sisters (Dakota, Montana and Nevada) all together too. Overall, it was a cute read with some cheese that I could have done without but not a bad read at all.

3 responses to “Review: Only Mine by Susan Mallery.”