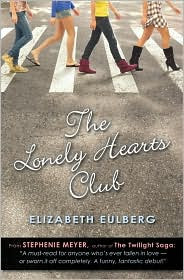 Love is all you need… or is it? Penny’s about to find out in this wonderful debut.

Penny is sick of boys and sick of dating. So she vows: no more. It’s a personal choice. . .and, of course, soon everyone wants to know about it. And a few other girls are inspired. A movement is born: The Lonely Hearts Club (named after the band from Sgt. Pepper). Penny is suddenly known for her nondating ways . . . which is too bad, because there’s this certain boy she can’t help but like. . . .

Oh well, on with the review. I read this book in one sitting over a lazy weekend. I thought it was too cute for words. Penny Lane was named after a Beatles song by her Beatles loving parents who are Beatles cover band snobs. She’s been in love with the same boy for as long as she can remember as their parents are really good friends and they spend every summer together. From the time they were children, Penny and Nate have been inseparable. As they grew older, their friendship turned into more than that and Penny thought she was going to be with Nate forever….until she tried to surprise him with her virginity and found him with someone else.

Walking in on Nate devastated Penny because she believed everything he told her about loving her and how special she was to him and blah blah blah. So after the depression phase is over, Penny gets good and pissed. She’s so over boys and the lies that they spew and the hearts that they break so she decides not to date anyone for the rest of her high school days. There isn’t anyone at school that she’d want to date anyway because she’s so over high school boys. Being the Beatles fan that her family is, she decides to start up her own club and she names it after a Beatles song, The Lonely Hearts Club.

She starts off as being the only member of her club and her boy crazy best friend Tracy tries to talk her out of her idea but Penny is serious about this. No more boys, no more heart ache and no more lies. When her ex-best friend suddenly breaks up with her long time boyfriend (the boy she dumped Penny for) and wants to be friends again, Penny does not want that. Her best friend Tracy? She wants that even less. Only Penny hears Diane out and caves. She lets Diane sit with them at lunch and she begs Tracy to be nice.

This was another great read from Elizabeth Eulberg and I think she just found herself onto my auto-buy authors list.

6 responses to “Review: The Lonely Hearts Club by Elizabeth Eulberg.”