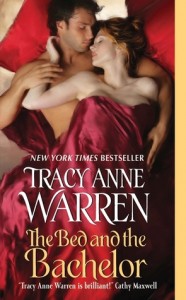 Reviewer: Rowena
The Bed and the Bachelor by Tracy Anne Warren
Series: The Byrons of Braebourne #5
Also in this series: Seduced by His Touch, At the Duke's Pleasure, Wicked Delights of a Bridal Bed, Tempted by His Kiss, At the Duke's Pleasure
Publisher: Avon, Harper Collins
Publication Date: June 26, 2011
Genres: Historical Romance
Add It: Goodreads
Amazon | Barnes & Noble | The Ripped Bodice | Google Play Books

Everyone knows the Byron brothers are “mad, bad, and dangerous.” But the devilishly desirable fourth son, Drake, is too scholarly to misbehave . . . or is he?
Lord Drake Byron has no time in his busy life to worry about taking a wife. He is more interested in the unbreakable code he has developed to defeat Napoleon’s forces. Little does he know that the irresistibly lovely new housekeeper he’s hired is really a French secret agent.

Sebastianne Dumont is not at all who she seems to be. Forced to spy to save her family, she embarks on a mission that takes an even more dangerous turn when she falls in love with the surprisingly tempting man she must ultimately betray. And if she succeeds in her mission, will she also break Lord Drake’s heart, while leaving her own behind?

Rowena’s review of The Bed and the Bachelor (Byron’s of Braebourne, Book 5) by Tracy Anne Warren.

I was excited for this book to come out because I’m a fan of Drake. I’ve been itching to get his story and finally it came. Tracy Anne Warren has done wonders with this series because this is book 5 and I’m still salivating at the mouth for more. Drake is brother to Cade, Jack, Ned, Mallory and the rest of the mad Byrons. He’s a mathmetician and is known for his distracted nature. He’s usually buried in his codes and work but when his housekeeper up and left for greener pastures, he was stuck filling the spot of his housekeeper and the woman he hired is going to make him sorry, he just knows it.
Only he doesn’t know exactly how sorry he’ll be once she’s done with him.
Sebastianne is a French woman who has found herself in a pickle. Her country is at war with the English and with her brilliant father having pulled into himself, taking care of their small family has fallen on her shoulders. When she finds herself having to turn spy in order to save her younger brothers, she does it without much of a struggle.
Her mission was supposed to be easy, get in, steal the cypher and then get out. Easy peasy, only it wasn’t because of course, Annie couldn’t help but fall for Drake Byron. The intense way that he was about his work and the easy way he had with the servants and her, made it all too easy for her to fall for him and in Byron’s case, he had a crazy bout out of lust for her. He wanted to do her all over the house and try out positions that were only fantasies with her. She got to him on a physical level and when he gets to know her, he likes her more and more.
Watching Anne and Drake get closer and closer was entertaining. I adored seeing Drake fall hard. I loved seeing him find the one woman who could distract him from his work because the Drake from the other books was all about his work. In this book, his work was still important to him but the distraction that he had going with Anne made the book all the more interesting because it was good to see. Warren does a fantastic job of fitting the other Byron’s from the other books into this story without them overtaking the story. While it was good to see everyone (I adore Mallory and Adam), it was good to see that I was still very much invested in Drake and Anne.
I very much enjoyed getting to know Drake’s servants, I enjoyed getting to know Anne’s family and seeing Drake as he was in the end made me grin like a crazy person all throughout the rest of the story. I’m not a big fan of the big ol’ secret plot but Warren did a good job of making me okay with the big secret in this book.
The one thing that had me rolling my eyes around the room was the villain. He wasn’t all that scary to me and more often than not, I found him annoying. I didn’t think he was all that much of a billy bad ass and the way the whole book ended had me laughing because of the way he went out of the story. To me, my sister is more scary that one week a month and she’s not scary at all.
Overall, this book was an enjoyable addition to the Byrons of Braebourne series and I think fans of Drake from the previous books will enjoy this book. Fans of historical romance will enjoy this one as well, it’s a good one.

Guest Review: Tempted by His Kiss by Tra