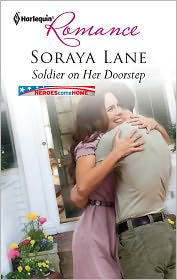 Rowena’s review of Soldier on her Doorstep by Soraya Lane.

Soldier Alex Dane promised his dying comrade he’d make sure his wife and daughter were okay, and so he finds himself on a doorstep with his heart in his mouth.

Lisa Kennedy loved her husband, but she must focus on her daughter, Lilly, who hasn’t spoken since her daddy’s death. Still, the least she can do is offer this battle-weary hero a place to rest.

When Lilly’s little hand reaches for Alex’s big, strong one, for the first time Lisa feels her buried emotions begin to stir.…


The premise for this story caught my interest, especially since it involves a soldier coming home from the war. I adore military heroes and Alex just seemed like he’d be such a yummy hero. The story was short but while I was reading it, I kept waiting for the story to get better. For me, the story just dragged, took it’s time unfolding and I found that I was too anxious for the story to take off and when it didn’t, I put it down.

I put it down around the 100 page count and stepped away for a couple of days, thinking that I just wasn’t in the mood for this book but when I went back to it and finished it, I wasn’t blown away with the story as I had hoped I would be.

So we have Alex and Lisa coming together in this story. Alex served in the war with Lisa’s husband and when he dies overseas, Alex is there and promises the husband that he will deliver some stuff to Lisa and he’d take care of them however he could. So Alex gets debriefed and immediately sets out for Alaska where his buddy’s widow is living with their young daughter, Lilly. Alex has a lot of guilt running amock inside of him and going to see the woman who was married to the guy that he holds himself responsible for getting killed is very hard. When we first meet Alex, you can tell that he’s got a lot of emotional baggage from the war.

I enjoyed seeing the bond that grew between Alex and William’s daughter, Lilly. I thought it was a great addition to the story and it was the part of the story that I was most interested in reading. Lilly has stopped talking and the people in her life are starting to get worried but when Alex comes into the picture, Lilly starts to slowly come out of her shell. There’s a scene in the book where Alex and Lilly are out on the lake in the boat with Lilly’s dog Boston. It was a cute scene and when the scene was over, I was bummed because the book went back to being just okay.

I guess my issue with this book was that even though there’s the emotional angst that both Alex and Lisa go through after losing William, I didn’t really feel their grief. I didn’t feel like Lisa really felt lost without William and I thought she fell too quickly in love with Alex. It just didn’t seem natural or flow quite right with me.

Overall, the story felt flat for me and when I finally finished it, I was only too glad to move on.

This book is available from Harlequin. You can buy it here or here in e-format.