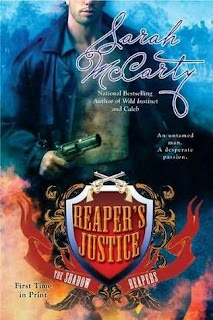 When the War Between the States came to its end, the battle inside Isaiah Jones raged on. Neither fully human nor fully wolf, he found his peace-and the passion his inner wolf craved-with Adelaide Cameron. Though their union was forbidden by the werewolf soldiers, Isaiah satisfied his urges by guarding her from afar. But when Adelaide is abducted, Isaiah must not only expose his dark nature, but invite her into the shadows with him.

Sarah McCarty is one of those authors who writes about everything and all that I have read is good.  I have read some of her Western historicals and so I was delighted to have the opportunity to read and review the first book in this paranormal series.

The characters in this novel are gritty and edgy and as such make an impression on the reader right from the first.  Isaiah Jones is a wolf-shifter and angry about that.  He calls his inner wolf “beast” and barely manages to live with his duality, angry that this condition was foisted on him when he was a boy, angry that he is now and has been an assassin under the direction of others, and angry that he has now found a woman who “speaks” to his human self and believing himself to be a monster, must accept that there is no future with this woman.  In fact, in those days of dealing with shape-shifters, a “Council” of guardians has ruled that no shifter can be in contact with a human woman.  Now, there are no shifter women, either, so these individuals are looking at a long, lonely life filled with violence and not much else.  Isaiah Jones, however, has pushed the rules and been “guarding” Adelaide Cameron for over a year without her knowledge.  He knows her history:  that she was a captive of Indians who slaughtered her family, that she has been run ragged by the over-protective “love” of her Cameron cousins, and that she wants more than anything to be an independent woman with a future of her own choosing and being respected rather than sheltered.  Her abduction by a gang of men bent on selling her South of the Mexican border only adds more terror and hurt to her life story.  It is from this situation she is rescued by  Isaiah and another “reaper” (as shifters were then called) named Blade.  In some sort of twisted way he and Isaiah have formed a pact–maybe even a friendship–and Blade knows Isaiah’s attachment to Adelaide is such that it is, in truth, love.

This is a very emotional story.  The reader is pummeled with Isaiah’s sense of hopelessness, his anger at being what he is, his frustration that the “beast” wants Adelaide as much as he does but is unwilling to claim her with any finesse or kindness.  There is also his deep sorrow at failing to guard her against further harm or terror.  Against almost unbelievable odds, Isaiah, with Blade’s help, is able to wrest her away from her captors, but then begins their deeper connection and friendship.  Addy knows nothing about the true nature of “reapers” but she knows that for some reason she is not fearful of Isaiah, even to the point that she acts on her attraction to him by requesting that he sleep with her and asks that for this one night, he love her sufficiently that she will always have that memory, even if she ends up married to someone else.  During those loving encounters, his “beast” manages to take over sufficiently that she is bitten twice–occurrences she deems erotic and nothing more.

This is not a simple love story but Isaiah’s love for Adelaide permeates this tale.  There is violence as Isaiah must protect her–somehow a pack of “reapers” wants Adelaide for sport–and learning what Isaiah is becomes Addy’s journey of discovery.  This is the kind of paranormal romance I have come to love where there are struggles and loving encounters–the kind or eroticism that serves the story and flows from the human encounters of the principle characters–there are issues over family and the evidence that Adelaide is a strong and stubborn woman, especially where Isaiah is concerned and insisting on the right to make her own choices.  The historical context is not just like a stage setting–it is very much a part of why this story works and gives credence to the plot and story development.  McCarty’s style of writing, her adept use of words to bring feelings and actions to life, are the foundation of a truly splendid novel that paranormal romance lovers will enjoy.  I most enjoyed watching Isaiah find himself, struggling to calm and live in sync with his inner beast, while wanting so much to realize fully what humanity he possessed.  There are surprises all along the way as one works through this text, and all keep teasing the reader to move forward–there is an implied promise in the narrative that ultimately the reader will have all questions answered.

This novel was such an entertaining one and a book that I don’t think McCarty fans, paranormal fans, and certainly historical romance fans will want to miss.  Adelaide is a spendid heroine as a woman who has come through hell and still use all her faculties to think and reason, especially in difficulty circumstances.  Isaiah is such a mixture of dark and light, of wolf and man, yet he is the kind of hero that I love to love–one who never wavers in his determination to keep Addy safe with the hope that somehow they will be together in the future. If not, he will give his life for her ultimate good.  What a guy!!  I sincerely hope you will think seriously about reading this novel and that you will enjoy it as much as I did.

One response to “Guest Review: Reaper’s Justice by Sarah McCarty”