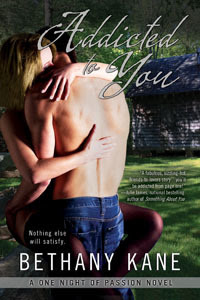 Tracy’s review of Addicted to You

Once, film director Rill Pierce’s raw sexuality and sultry Irish accent made women weak with desire. But a tragedy has left him barely recognizable. Leave it to Katie Hughes, his best friend’s sister, to bring him back to life with her own pent-up passions. But will Rill’s insatiable attraction to Katie heal his pain-or just feed the darkness within him?

Rill’s wife died 2 years ago and since then he’s been holed up in Vulture’s Canyon, Illinois. He’s been drinking himself silly and generally being a hermit while he deals with his own thoughts.

Katie Hughes shows up in Vulture’s Canyon for many different reasons – the main one to try and “help” or “save” Rill from this black hole he’s in. She’s also trying to find a bit of herself as the life she’s living isn’t one that’s making her happy. Besides that – she’s been in love with Rill for years but as his dead wife was her best friend she obviously never made a move.

Rill is completely un-thrilled with Katie being there and tells her to leave more than once but does he really want her to leave? Not really. He thinks that he’s doing her a favor by trying to make her leave because he thinks of himself as an sexual deviant that’s barely in control. But Katie’s more than ready to take on Rill and all he has to offer. The relationship with Rill is tumultuous at first but soon they become close and Katie finds herself falling even deeper in love with Rill. Katie’s not sure though, how Rill feels about her and where, if anywhere, their relationship will go.

Rill, the poor guy, was totally messed up. He had discovered things about his wife after she died that sent him into a tailspin. Besides that he was just certain he was a chip off the old block in the sex dept. His mother went from man to man to man and his uncles were total skirt chasers among many other things. He had a hard time thinking about what he could become if he let himself go sexually and frankly had never snapped the leash, so to speak, with his wife. Then along comes Katie. She’s gorgeous and a spitfire and not afraid to take Rill on.

Katie hated her job in Hollywood and though she heads to Illinois to help Rill she’s also looking inward and trying to find out what she really wants out of life when it comes to her career. The people of Vulture’s Canyon look on her suspiciously because of where she’s from and the car she drives, but they help her work out many issues – including one that helps with her future job. I loved how Kane worked the townspeople into the story and how they helped Katie. It seemed like a typical small town but it really was so much more.

Overall this was a fun, sexy, somewhat emotional read that definitely made me want to read more of Kane’s work.