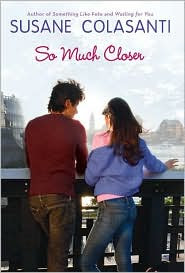 When Brooke’s crush, Scott, moves from their suburban town to New York City, she decides to follow him there. Living with her formerly estranged dad and adapting to a new school are challenging, and things go from bad to worse when Brooke learns that Scott already has a girlfriend. But as she builds her new life, Brooke begins to discover a side of herself she never knew existed. And as she finds out, in the city that never sleeps, love can appear around any corner…

I wanted to read this book because it reminded me so much of the old show, Felicity. You see, Felicity does the exact same thing that Brooke in this book does. She moves to a different city to follow a boy that she thinks she’s meant to be with. She just completely picks up her life and moves it for a person they didn’t know all that well but had a fierce crush on.

In this book, Brooke moves to New York City to be closer to Scott. She has a huge crush on Scott and when she finds out that he’s moving to New York…she makes that move. She moves in with her Dad and she tries to get into Scott’s inner circle, thinking it’ll be easy since they’re both new to the city but when she runs into Scott and finds out that he already has a girlfriend, she’s bummed…but not discouraged.

To say that Brooke has balls of steel is putting it lightly. This girl has monster balls. She moves to New York with the sole purpose of making Scott realize that they were meant to be together. We’re talking about a guy who didn’t know she existed until right before he moved away from Jersey. Scott having a girlfriend doesn’t really phase Brooke because she keeps on keepin’ on and with the help of some new friends, Brooke makes a life for herself in the big city.

Watching Brooke grow into her own and seeing her grow apart from her friends back home and closer to the friends of her new home, made for an entertaining read (I say this a lot in my reviews but I don’t know how else to word it). Brooke doesn’t get it right in the beginning but seeing her make mistake after mistake and then finally getting it right was fun to read. Her friendships with John and with Sadie were fun to read about but there were quite a few things that I wish I had gotten more from.

One of those things was Brooke’s relationship with her parents. Her Mother was introduced as this bittered woman who was scorned by Brooke’s father and a few descriptions of what happens next comes along but it would have been nice if more was built on to that whole thing. The same goes with Brooke’s father. There’s a troubled relationship there but not much is explained or dealt with aside from that. It just would have been nice if we got more from those two then we did, I probably would have enjoyed this book even more.

Another thing that kind of fell flat for me was her friendships with her friends from back home. They drift apart and then that’s it. Not much else came from that and it would have been nice if something more was built on and then dealt with on that score.

My favorite part of this book were the additions of both Sadie and John. I adored their characters and the friendships that bloomed with Brooke. The way that John saw New York, the way that he felt about New York made me want to go there and see what he’s talking about and seeing Sadie come out of her shell and go after her guy was too cute for words.

Overall the story was good but I couldn’t help feeling that it could have been so much better. I’m glad that I read this book and I will definitely be reading more from Colasanti, it’s just this book isn’t my favorite of the Colasanti books I’ve read.

4 responses to “Review: So Much Closer by Susane Colasanti.”