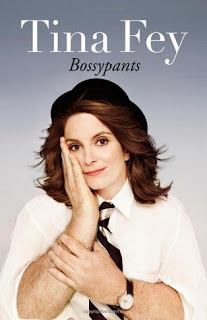 Before Liz Lemmon, before “Weekend Update,” before “Sarah Palin,” Tina Fey was just a young girl with a dream: a recurring stress dream that she was being chased through a local airport by her middle-school gym teacher. She also had a dream that one day she would be a comedian on TV.
She has seen both these dreams come true.
At last, Tina Fey’s story can be told. From her youthful days as a vicious nerd to her tour of duty on Saturday Night Live; from her passionately halfhearted pursuit of physical beauty to her life as a mother eating things off the floor; from her one-sided college romance to her nearly fatal honeymoon-from the beginning of this paragraph to this final sentence.
Tina Fey reveals all, and proves what we’ve all suspected: you’re no one until someone calls you bossy.
(Includes Special, Never-Before-Solicited Opinions on Breast-feeding, Princesses, Photoshop, the Electoral Process, and Italian Rum Cake!)

I have been a fan of Saturday Night Live since the 90s.  But my favorite seasons were with Tina Fey, Amy Poehler and Maya Rudolph in the cast.  So it’s a no brainer for me to read Bossypants.

If you’re familiar at all with Tina Fey, you will be pleased to know that her humor transfers to the page.  Bossypants was a quick, funny read with some oddly touching moments.  She pens a love letter to Amy Poehler, her partner in wit.  She describes a scenario where Amy was telling a joke that someone else at SNL took exception too (it was raunchy and definitely not ladylike) and when someone told Amy that they didn’t like it, she promptly told them “I don’t give a f*** if you like it.”  Ballsy woman!  And this also highlights a theme throughout Bossypants.  Female comedians are treated differently (and not in a better way) than their male counterparts.  If a man was telling the same joke Amy was, you KNOW that the other male SNL staffer would not have made an issue of it.  But this theme isn’t bashed over the reader’s head while enjoying Bossypants.  In Tina’s sly writing, it’s just something that’s interwoven among her various stories.  But one has to laugh when male comedians were worried about more female comedians joining their improv troop because there wouldn’t be enough parts to go around.  In improv?  Ridiculous!

One touching (but still funny) chapter that I’m still thinking about is the chapter about her father.  He’s a rock-solid guy and you can tell he definitely had a lasting effect on his daughter.  She also, in a backhanded way, claims he’s partially responsible for raising an adult virgin.  LOL

And she also discusses the whole Sarah Palin thing.  I liked seeing what was going on behind the scenes there.

I’m not going to grade Bossypants because it’s comedy, either you like it or you don’t but it’s all in your own taste.  I really enjoyed Bossypants because I like Tina Fey’s sense of humor.  If you enjoy it too, there’s a good chance you just might enjoy reading this book as much as I did.

And I will leave you with a Tina Fey pearl of wisdom that I also follow:

This book is available from Little, Brown & Co. You can buy it here.