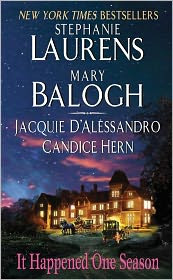 We asked our readers what story they would most like to see from four bestselling authors. They responded . . .

A handsome hero returns from war, battle-scarred and world-weary. But family duty calls and he must find a bride.

A young lady facing yet another season without a suitor never expects to find herself the object of his affections.

It Happened One Season

have come together to create one of the most unforgettable events of the year. The results are spectacular—each story is as unique as a lover’s first kiss.

What a fun group of stories this book turned out to be. In this book, the authors all took the same premise and wrote different stories for them and I was mighty interested to see if they’d all end up writing the same story and I’m pleased to see that they didn’t. Each story was unique and different and though I longed for more, when I closed the book after finishing the last story, I was content.

In the first story, we get Sebastian and Tabitha’s story. In this story, they’re thrown together because Sebastian has to find a wife to marry and get himself an heir, even though he’s a second son. His older brother’s wife just had their fifth child…which was another daughter and the brother is basically throwing in the towel.

Sebastian, who has come home from the war and wants nothing more than to just relax for the rest of his days in his house and read some books (haha, that was totally said in my Nacho Libre voice). After going to his first ball, he quickly becomes bored with all of the matchmaking mama’s so he hides in the library where he meets his heroine, who is on a mission to find some secrets.

Sebastian and Tabitha were a lot of fun to get to know. The way that their story came together felt like puzzle pieces being put in its right order. They were too cute! I loved the way that they went all in with their mission. I loved that they were in it together and I loved how straight up Sebastian was with Tabitha’s parents from the jump. Laurens did a wonderful job of building up their romance in the short amount of pages that she had. It was a delightful read and made me hungry for more.

In the second story, Cleo and Jack fall in love. Cleo is a widow and because her husband wasn’t the best of husbands, she’s more than content with being left alone now. She gets lonely from time to time, especially since she remembers a long ago kiss with Jack Gilchrist. When she runs into Jack again, things heat up because though she tells him that she’s perfectly content with the way that her life is, Jack goes out of his way to show her just how good it would be between the two of them. Jack can’t get that long ago kiss out of his head any more than she can and watching these two come together was another enjoyable addition to this book.

In the third story, we get Alec and Penelope’s story. Alec feels guilty over the death of a soldier he was in the war with, Edward. He thinks that by taking care of Edward’s sister that all will right itself in his conscience. He wasn’t expecting the beauty or the baggage/scandal that would come when meeting Penelope but when Penelope needs someone most, it is Edward that steps forward with a marriage proposal that rocks her world right off its axis.

I really enjoyed this story, it was short but it was definitely sweet and I didn’t feel like I didn’t really get to know both Alec and Penelope. It was an enjoyable read, one that had me smiling like a loon all the way through.

In the last story, I think this one was my favorite. It’s Nathaniel and Phillipa’s story. Nathaniel needs to find a bride but he’s not in the mood to deal with the demanding mama’s and so he does what any man of his station would do (not really)…he hides behind an orange tree. He never thought that he’d meet his future wife there but he does. He meets Phillipa, who is hiding there as well. She’s got a noticeable limp that doesn’t let her walk or dance without people noticing something’s not right but when she meets Nathaniel, she can’t quite believe how things turn around for her. I really enjoyed reading about a heroine with a handicap and the man who fell in love with her. I thought that Nathaniel was such a great hero and Phillipa was just as great. Their story was super cute and was my favorite of the bunch!

Overall the book was a great collection of stories that made me laugh and made me sigh. I can’t ask for more in a book so I’m a pretty happy camper with this one. If you read and enjoyed the other anthology that came out, It Happened One Night than I’m sure you’ll enjoy this one as well. It’s a great read!