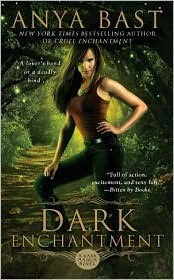 Seduced in a dream by a handsome, rugged man, Charlotte Bennett decides to let pleasure and desire lead the way-only to discover her “safe night of passion has dangerous repercussions.

Charlotte is drawn by compulsion to Piefferberg, the containment area that the Fae live in. That happens when Unseelie Fae, Kieran, uses his magic to try to save his people.

You see back thousands of years ago Charlotte’s ancestor had a hand in hiding a piece of the key that will open the book of bindings – the one book that has the spell that can break the warding around Piefferberg where the Fae have been imprisoned since the 1500’s. The Unseelie court wants to use Charlotte’s memories to get to those of her ancestors so that they can find out where the third and final piece of the key is.

There are, however, people who don’t want Charlotte’s brain “harvested” for memories and are trying to kill her. Though Charlotte is pissed off at Kieran for being dragged into the whole situation – because she loathes and fears the Fae – she has to depend on him for her safety and protection.

While protecting Charlotte Kieran discovers that she’s not at all as he first thought. Though she first dressed as a dowdy woman there was an incredible body under all of those dark colors. Kieran also discovers that Charlotte has an incredibly strong spirit and is more open-minded than he believed. But Kieran can’t fall in love with Charlotte because he is cursed. He is cursed to never know love and if he does fall in love then he will die. If he is loved in return then that woman will die also. Sometimes, though, life happens despite the curses and then the consequences have to be faced.

This is the third book in the Dark Magick series and it was a good one. I’ve really liked the world that Bast has drawn in this series with the Fae, the Phaendir (druids who hate the Fae) and the humans. She always shows us all three worlds and I love how they all come together to make a great story.

Of course I knew from the get go that Kieran and Charlotte were going to fall in love because, ya know, he was cursed to not know it and this was a romance so it was logical that it would happen anyway. Lol The part I couldn’t figure out was the curse. How they were going to break it, IF they were going to break it and how exactly they were going to deal with not only falling in love with each other but knowing that because of their love they were now going to die. It was well done and I really enjoyed the whole situation. Parts were very happy and light and others very sad and emotional and I loved having that in story. I can’t wait to see what happens next in the series.

One response to “Guest Review: Dark Enchantment by Anya Bast”