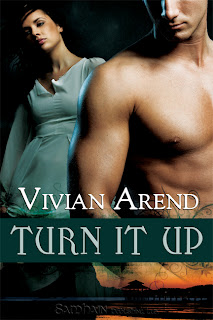 Holly‘s review of Turn it Up (Turner Twins, Book 2) by Vivian Arend

She wants it. He’s got it…and a whole lot more.


Maxwell Turner considers his stubborn and resourceful attitude a plus. After all, it usually gets him what he wants—except for Natasha Bellingham. The long-time family friend may be ten years older than he, but so what? He’s plenty old enough to know they belong together. Now all he has to do is convince her.


Over the past few years Natasha’s love life has degenerated into a series of bad clichés. Her biological clock is ticking—loudly. As a proven architect with her own house-design company, she’s financially ready for a baby. Who says she needs a permanent man in her life for that? She just needs a “donation”.


But there’s one non-negotiable clause: He wants forever. And he intends to do everything in his power—fair and unfair—to make it happen.

This is the second book in the Turner Twins series, but it’s set before the events of the first book take place. I have no idea why that is. I can’t say I was really spoiled for the story because of it, but I suggest reading them out of order. I really like Arend’s writing style. Her stories are very readable.

This is an older woman/younger man story. Natasha Bellingham has pretty much run out of time to start a family. After much consideration, she decides she’s going to go it alone. None of her relationships have worked out, and she doesn’t need a man to become a mother, does she? But the night of her last hurrah as a single woman, she drinks way too much and spills the beans to Maxwell Turner.

Max has been in love with Tasha most of his life. When he finds out her plans to become a single mother, he decides now is the time to act. Before she has a chance to recover from her night out, he proposes a plan – the become parenting partners. If she marries him, that will mean two parents for the kid and a large extended family as well (she isn’t close with her family, but there are about a billion Turners). Tasha isn’t too receptive to the idea at first, but Max knows he can talk her into it..and a whole lot more, if given the time.

Tasha has to admit Max’s plan is well thought out and makes a lot of sense. The idea of having a partner to share the parenting with is pretty appealing..but Tasha is too afraid of being hurt again to risk more than a light friendship. Too bad for her Max has other ideas…

I enjoyed this one, though not as much as the first in the series. Tasha’s hang-ups about relationships made sense in the beginning, but the longer she held herself back the more I questioned the fact that she was 34 years old. Even though men mature a lot slower than women, Max was definitely the more mature of the two when it came to love.

I expected the age issue to come into play, but Arend handled it extremely well. With the exception of a few minor freak-outs and a crazy, bitter cousins, it isn’t much of an issue at all. Although Tasha is concerned that Max won’t be faithful because he’s so much younger and men her age can’t commit, she doesn’t let come between them. It’s just too bad she let so much other stuff come between them…

Max was definitely the best part of this book. I adored him. He was a strong and caring, and he wasn’t afraid to go after what he wanted. The way he pursued Tasha really appealed to me, because it wasn’t this crazy sensual assault with no emotion behind it..he was thoughtful with her. He showed her that he cared about her, in the bedroom and out of it. It didn’t hurt that he was sexy and had a genius level IQ, either.

Lila, the crazy bitter cousin, was a little over the top. I get that she had some personal hangups that kind of fueled some of Tasha’s hangups, but..well, the whole drama with her seemed like a waste of page time. There wasn’t really a point in including it other than to add external drama..which wasn’t really needed, considering.

I liked that Max knew what he wanted and went about getting it. He didn’t screw around or play games – he stated his intentions and followed through. Overall a solid read.

One response to “Review: Turn it Up by Vivian Arend”