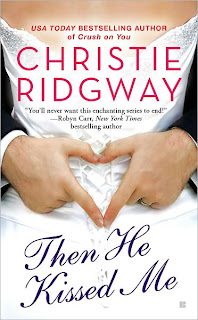 Holly‘s review of Then He Kissed Me

The Baci sisters are on a mission to save Tanti Baci—the winery that’s been in their family for generations—by transforming it into the perfect wedding destination.

But women cannot live by wine alone…
When Stevie Baci gave her own business the tongue-in-cheek name Napa Princess Limousine, she never dreamed she’d one day be driving a real prince around Napa Valley. But Jack is not a typical prince. He’s half-American and an old college roommate of one of the Bennett brothers, the Baci sisters’ rivals in the wine business. He’s also smokin’ hot—so what’s the harm in engaging in a little fun?

Jack Parini has indulged himself in la dolce vita since surviving a disturbing incident in his teens. Visiting Napa to help with his sister’s wedding, Jack is determined to taste women along with the wine. But when he can’t help but kiss Stevie, he finds himself reevaluating his way of life. Because this California girl in a black chauffeur’s hat does more than drive him crazy—she’s got him wondering what she’d look like in white…

This is the second book in Ridgway’s Three Kisses series, about the Baci sisters and their winery in Napa Valley. I enjoyed the first book and was looking forward to the rest of the series. Both Stevie and Jack were excellent characters. Ridgway really excels at writing deep, emotional romances that aren’t bogged down or too heavy.

Stevie is the most closed off of the three sisters. As the tomboy, she’s always felt somehow inferior to her sisters, not to mention out of step with them. Unlike the other two, she’s chosen to start her own business rather than run the family winery. But when Ally breaks her foot, Stevie has to step in and take over as planner for a huge event..the wedding of her ex-fiance. As if that isn’t bad enough, the soon-to-be bride’s brother is dogging her every step, determined to make sure she doesn’t harm his sister in anyway. But who will protect Stevie from getting hurt?

Jack has done his best to live in the moment since an incident happened in his teens. Now the only thing he takes seriously is making sure his baby sister is happy. Keeping an eye on Stevie is no hardship – she attracts him on every level. But when things get a little too serious, will Jack and Stevie be able to set their pasts aside and accept true love?

Stevie really struggles with feelings of inadequacy because of some careless words said in anger by her ex-fiance, plus a feeling of being the odd one out in her family. As a result she holds herself back from getting too close to anyone or anything. She’s always been “one of the guys” and she hides her femininity as much as possible. While this could have been annoying, I rather enjoyed it. It was refreshing to see a woman who chose to “have sex like a man” (ie without messy emotions getting in the way). Plus, it allowed for a lot of personal growth on her part. Watching her learn to open up and find herself was wonderful.

Jack isn’t really the playboy everyone assumes he is. Yes, he’s been around the block a time or 20, but many of his escapades were wildly exaggerated. That doesn’t mean he’s ready to settle down, however. His refusal to get involved in a messy relationship don’t stop him from being attracted to Stevie. Again Ridgway excelled at writing a fairly common trope. Jack had quite a bit more depth than he was given credit for, so the ties he came to feel to Stevie were even more poignant.

The secondary romance between Jack’s sister, Roxanne, and her fiance, Emerson (Stevie’s ex), was also interesting. There were times I was more interested in them than in the main protagonists. Especially Roxanne – she was very well written. Emerson was kind of a jackass at first, but he really came around as the story progressed.

Another solid contemporary romance from Ridgway. The progression of the romance was well done and I loved the relationship between the sisters. I only wish I didn’t have to wait another 6 months for the 3rd book, Can’t Hurry Love (the book I’m most anxious for).