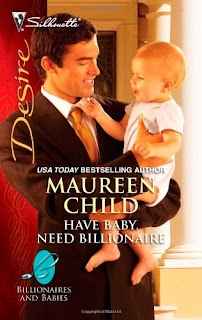 He’d certainly never set eyes on—much less gone to bed with—Tula Barrons. That he would have remembered. Yet businessman Simon Bradley agreed to let Tula and her infant cousin—a child she claimed was his—stay in his mansion until he had proof of the little boy’s paternity.

But having Tula under his roof revealed something unexpected—her father had once nearly destroyed Simon’s business. The billionaire now had the perfect opportunity for revenge. He could seduce Tula and take away the baby she loved…but if he succeeded, he could lose all he’d come to care for.

I’ve been reading Maureen Child for years. I buy based on her name alone. Unfortunately her more recent releases haven’t been on par with what I’ve come to expect from her.

I started this novel and set it aside after 34 pages. I don’t generally quit a book so early on, but the actions of the heroine convinced me not to continue.

Tula Barrons has been named guardian of her nephew upon the death of her cousin. In her will, the cousin said she wants her son to go to his father, billionaire Simon Bradley, whom she hasn’t told about the baby. She left Tula in charge of approving him as caretaker.

The problem is that Tula has daddy issues. Her father is a very rich man who has always made his disappointment in Tula very clear. She’s chosen to make her own way in the world. Which is commendable, except she carries a major prejudice for men who wear suits (ie, rich men). She goes to Simon’s office to tell him about his son and to offer him a chance to discuss the terms of her cousin’s will. The first meeting goes fairly well, all things considered. Tula babbles like a moron at first, but once she explains the situation and invites Simon over, she calms down. Simon, naturally, doesn’t take the news well. He hasn’t seen Tula’s cousin in over a year and, in fact, barely remembers her. To hear he has a child..well, he’s shocked. And somewhat disbelieving. He agrees to meet with Tula that evening and shoos her out of his office. I can’t say I blamed him.

This is where the novel went downhill. Tula goes home and calls her best friend, to tell her how the meeting went. While on the phone she makes a few comments that bothered me, in regards to Simon, but it’s once she gets off the phone that I became truly annoyed. She assures the baby that she won’t let mean old Suit Simon suck all the joy and creativity from his world. This bothered me because she doesn’t know Simon. She meets him once, under less than ideal circumstances, then jumps to conclusions about the type of person he is.

Then it goes from bad to worse. Simon shows up and Tula continues to insult and harangue him. When he’s obviously shocked and angry over not knowing about his son, she tells him to suck it up. She gets angry with him for handling the baby gently and decides that’s proof that he isn’t fit to care for the baby. Then she jumps to the conclusion that he’s insulting her work as a children’s author because he made the mistake of asking what she did for a living. Since her father doesn’t approve, she assumes Simon is being condescending about it also. WTF?

I decided at that point I couldn’t read anymore. Maybe Tula is reformed in the end. Maybe Simon really is the jerk she assumes he is. But the automatic assumptions on her part made me angry enough that I don’t care to find out.

This book is available from Silhouette Desire. You can buy it here

One response to “Review: Have Baby, Need Billionaire by Maureen Child”