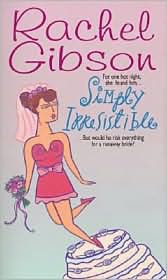 Georgeanne Howard leaves her fiancé at the altar when she realizes she can’t marry a man old enough to be her grandfather, no matter how rich he is. Hockey superstar John Kowalsky unknowingly helps her escape, and only when it’s too late does he realize that he’s absconded with his boss’s bride. This bad boy isn’t looking to be anybody’s savior but his own. Still, a long night stretches ahead of them—a night too sultry to resist temptation.

Seven years later, Georgeanne and John meet again. She is on her way to becoming Seattle’s domestic darling and he is past his hellraising days. Shocked to learn that he has a daughter, John’s determined to be part of her life. Georgeanne has loved John since the moment she jumped into his car, but will he risk the wrath of his boss, and one final chance at glory, to prove that this time his love will be everlasting?

I cannot believe that I’ve waited this long to read this book. It was another winner for me by Rachel Gibson and it once again brought hockey guys to the forefront of my thoughts. This book had me laughing, tearing up and just enjoying the emotional roller coaster that Rachel is so good at throwing us on.

This book follows John Kowalsky and Georgeanne Howard as they make their way toward that happily ever after and their romance was a very rocky one. When we first meet Georgeanne, she’s getting ready to marry a 50 year old guy and she’s only 22. When we first meet John, he’s a guy who is clearly struggling with the death of his first wife so he drinks himself into forgetting everything. He’s mean and he’s pretty scary but I never once hated him.

I thought he was a jerk but a likeable one. The way that these two came together and the chemistry that literally flew off the pages made for one steamy romance that I could not put down. Rachel Gibson wrote a memorable romance with fantastic characters who became real to me. Both John and Georgie were characters that through the course of the book became like family to me. I wanted to be John’s baby Mama and I wanted to be Georgie’s best friend.

The whole secret baby plot thing is a storyline that has to be written well for me to enjoy and I’m glad to say that Gibson made it work in this story. I felt bad for John but I didn’t hate Georgie for the decision she made and as the book wore on, I wanted them to get over themselves and make things work for Lexie.

With that said, I adored Lexie. I think she was my favorite part of the story. She was such a …kid. The way she dressed up and wore too much make up and just her personality, it totally made for some great reading. To know her was to love her and watching her develop a relationship with John was just too effing cute.

The romance between John and Georgie was a win for me as well even though there were times when I wanted to punch them both in the stomach to get them to get over themselves. Georgie with her controlling ways and John with his jerkness (yeah, I totally made that up, haha). I mean, when John first finds out about Lexie and the way that he finds out about Lexie was totally wrong and the way that he reacted to it, I could totally feel his pain. I could feel the hurt and the accusation and just everything and all of that made my heart hurt.

On the other hand, I felt for Georgie too. Her reasons, her decisions were not made selfishly and you could tell that she was a fantastic Mom. She wasn’t perfect but she didn’t try to be and that’s what I liked about her.

It was good to see everyone from the team and the whole story was an all around treat. Rachel Gibson does a great job of sucking you into John and Georgie’s world and she sure knows how to turn a story. I really enjoyed this book and would definitely recommend this book to anyone in the mood for a great sports romance.