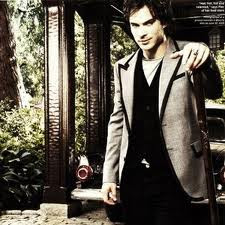 It’s a new month which means there’s a new hero of the month. This month’s hero stars in best selling author’s L.J. Smith’s Vampire Diaries but it is in the CW’s Vampire Diaries TV show that this smexy character captured my heart.

This month’s hero is: Damon Salvatore.

Damon is the bad boy Savatore brother who comes back to Mystic Falls to torment his brother, the goodie good Stefan because Damon swore that he would spend the rest of the eternities making Stefan’s life a living hell and he’s making good on that promise because there isn’t a moment when Damon’s not being a smart ass about any and everything under the sun.

The thing about Damon is he has a lot of things in common with his brother Stefan and the main thing is their taste in women. They fall in love with the same women. Twice in fact…and the reason Damon is so bitter (and he is totally bitter) is because both of the women that he fell in love with…were both in love with Stefan. 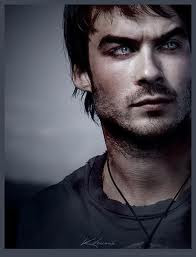 Damon’s bitterness has driven him to do some pretty extreme things. In the first season his bitterness drove him to releasing a bunch of rabid vampires on the small town of Mystic Falls, all in the hopes of finding Katherine. Katherine is the first woman that the Salvatore brothers fell in love with and she’s the woman that started the feud between the brothers.

In the beginning, I hated Damon. When he first came to Mystic Falls and started being an ass toward Stefan, I wanted him gone. I wanted some mighty fierce vampire to swoop in and slit his throat but as the season progressed, I started to see why Damon was the way that he was. I started to see the Damon that Elena believed in and the Damon that even Damon didn’t know was in him.

He started showing signs of a very hurt, deeply tortured man who I just have to get to know more. Damon has a certain charm that gets me right in the chest area. He’s got this draw to him that I’m unable to turn away from and I think it’s the knowledge I have that there is a good guy buried deep down inside the guy that Damon shows to everyone. Damon is used to living in the shadow of his perfect brother Stefan. It’s hard to compete with someone that everyone loves and Damon has stopped trying to win everyone over and has become his own person. He’s become the bad brother who relishes his role but underneath the witty remarks, the badass-ness and all of the drama, there’s a heart that beats strongly and fiercely.

On top of the heart that I know is lurking underneath all of the human blood he consumes, his witty come backs and hilarious one liners is what keeps me coming back for more each week. I mean, there’s no one on the show that can deliver the lines he does with a straight face and still crack me the heck up.

I mean, how can you not fall in love with a guy who deliver lines like these?

Mason: I’ve heard a lot of great things about you.
Damon: Really? That’s weird because I’m a d**k.

“Guess what? Everyone hates me. But you can’t deny: we were bad ass!”

“I get it. He’s the reason you live. His love lifts you up where you belong.”

“I have two liters of soccer mom in the fridge.”

“How long are you gonna blame me for turning your birth mother into a vampire?”

There’s plenty more from where that came from. Damon is one of those misunderstood characters that will tear at your heart. He’ll have you coming back for more each week and if you haven’t been watching this show then you should totally fix it because there’s a reason why Damon’s this month’s hero of the month and you really have to see it to figure out why.

…and that’s your scoop,

Hero of the Month: Dexter Jones from Thi

Hero of the Month: Nash Hudson.

Hero of the Month: Prince Ash.

9 responses to “Hero of the Month: Damon Salvatore.”