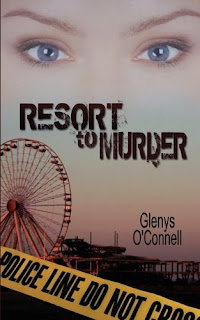 Judith‘s review of Resort to Murder by Glenys O’Connell

Falsely disgraced police detective Ellie Fitzpatrick is prepared to face a vicious killer to redeem herself but is she also brave enough to make peace with the man she loves? When her meteoric career crashed and burned after she was accused of accepting bribes from thugs running a protection racket, Ellie is suspended from the job she loves and believes herself abandoned not only by police colleagues but by her lover, Detective Liam O’Reilly. She is called back to work when a biography of a serial killer she arrested suggests the man may be innocent. Reilly vows to protect Ellie from the gang who tried to frame her and the vicious killer who’s stalking her. Can she trust him with her life?

Northern England, specifically the area known as Yorkshire, possesses a wild beauty with its rolling hills and misty moors, dotted with flocks of sheep and intersected with winding roads. Set in the midst of that is the bustling city of Leeds, a manufacturing hub and one of the transit centers of the region. Having traveled there extensively (I took the train between Skipton and Leeds often over a five week period), one becomes aware that this is no out-of-the-way part of civilization. But it is a long way from better known metropolitan areas like London and Edinburgh and there are a number of resort areas along the North Sea that draw sizeable crowds throughout the warm weather.
Caught in the throes of a personal and departmental scandal, Inspector Ellie Fitzpatrick of the Leeds Special Investigative Unit is on a six-month unpaid suspension, wrongfully accused of money laundering, taking bribes, and compromising important criminal investigations. She has taken up residence in her family’s vacation cottage, very close to the Funland Pleasure Center, a resort area on the North Sea. In addition to being shunned by her co-workers, she is also nursing a broken heart. Her lover and friend, Inspector Reilly, took off and apparently abandoned her in her time of greatest need. Now she is alone except for the attentions of her neighbor, Brad Scott, who has been wooing her for months and who has now proposed. In her heart of hearts she knows she still loves Reilly, but she is also convinced that their relationship is at an end. Still, she hesitates to accept Brad’s proposal. Something is holding her back.
Now there has been a brutal murder very close to her cottage, and while she has been cleared of any suspicion, Reilly as the investigating officer is back in her life and Brad is the chief suspect. Ellie has been called back to duty by her department head even though she still remains under a cloud. Her relationship with Brad threatens to compromise her future success. Her life and her professional future are a mess. It is a story worthy of a James Patterson novel or the best of Earl Stanley Gardner.
This is a love story–broken hearts, miscommunications, anger and frustrations, apparent abandonment issues on both sides, and an attraction that won’t go away. But this love tale is wrapped up tightly in a murder mystery that involves the man she has been dating, a possible serial murderer, and persons related to earlier victims who continue to be under suspicion. This novel is not necessarily easy to read–by that I mean that it won’t be the kind of book you can sit down and consume easily in a couple of hours. The reader will have to keep the characters straight; the story line is complicated and requires processing as one continues on, and the reader must deal with the hints and clues that are embedded in the story. All in all, it is a very good read.
Ms O’Connell has done very well in writing about the processes and inner workings of a British police investigative unit, and she has a very good knowledge of life in this part of the United Kingdom. That being said, these characters are people–and people are people no matter where they live, and they are subject to the same feelings and urges worldwide. And as they become embroiled in difficult circumstances their true nature and character emerges. So it is in this story.
This is a story about love and loss, wounds and forgiveness, expectations and disappointment, broken trust and trust regained. And throughout the story is woven Ellie’s personal “take” on her experiences and how she is responding to the pressures and demands of her personal and professional life. I found this story very readable and engaging. I own up to really liking mystery novels so I was hooked from the first. That there was a fascinating love relationship gone awry contained within pleased me immensely and I read this novel nearly in one sitting. This is one I didn’t speed read. I didn’t want to miss one word. Part of that, too, is that I love England–I am a true Anglophile–so the context of the story drew me in as well.
My hope is that mystery fans as well as romance fans will read this novel because I think it will be a very satisfying experience. It is well-written and researched, all the parts assembled with skill and care, and testifying to a writer with a great deal of writing finesse and talent. Just the kind of book we readers really don’t want to miss.

This book is available from The Wild Rose Press. You can buy it here in e-format.

2 responses to “Guest Review: Resort To Murder by Glenys O’Connell”