I hope you all had a good week last week.  I seriously did not. lol  It was really the week from hell.  I’m getting ready to go on vacation and there’s always so much work to do in preparation that sometimes it just doesn’t feel like it’s worth the effort.  Of course I won’t say that once I’m actually on vacation. 🙂  More about that in another post.

On to what I read last week.  Fair warning…most of what I read was for review on The Book Binge as I was catching up with reviews before vacation.  Most were novella’s or shorts:

First up was Experimenting With Ed by Katie Allen.  Novella – Read for The Book Binge.  This was a damn good story about a women scientist, her boss who’s after her and Ed.  Ed is a quiet, unassuming, soft spoken man who has no clue who he really is.  He’s been altered, along with 4 other men, by the government to be the perfect soldier – but they all escaped.  Reading about Ed and Claire and their race to get away from Claire’s boss was great and funny too.  I just love Allen’s writing.  4.5 out  of 5

Next I read Snow Play by Barbara Elsborg. Read for The Book Binge.  This was a cute little quickie about a woman who goes on vacation and has a rotten time.  When things seem to be going as bad as they can she meets Zach and has a great time.  My first read by Elsborg but I liked her writing style and humor – I’ll have to look into reading more of her books. 4 out of 5

After that it was Take It Off, Warrior by Eliza Knight. Read for The Book Binge.  A cute novella about a women interviewing strippers for her friends’ bachelorette party and ends up meeting the time travelling warrior of her dreams.

Next was Ghost Flute by Kimberly Dean.  Novella – Read for The Book Binge.  Another good novella that takes place on an Indian reservation.  It involves a legend about a ghost playing a flute that lures women in a sexual way.  While house sitting Serena is being pulled by the music of the flute while Chayton, the man who’s attracted to her tries to stop it all. 3.75 out of 5

Winner Takes All by Jenny Urban and Elizabeth Silver was my next read.  This was a very hot book about 2 friends who make a bet and one literally has his ass on the line. You can read my review here. 3.75 out of 5 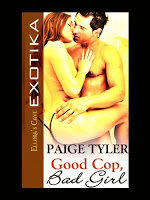 Good Cop, Bad Girl by Paige Tyler was next on the agenda.  Quickie – Read for The Book Binge.   I gotta say – right off – that this is my second book by Tyler and they are some good, cute reads.  However, of both of those books the covers have been horrid.  What is with that?  The poor woman! There are some EC Exotika books that have some decent covers…hers aren’t any of them.  Anyway, a cute story about a woman who is having a birthday party at her home and her and her friends are a little too loud.  A copy comes to the door to give her a citation for being too loud and she thinks he’s a stripper posing as a cop.  Oops.  She’s thrilled of course when he comes back later to give her her birthday spanking. 3.75 out of 5  You can read my review here. 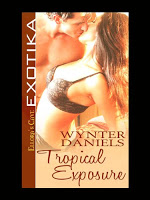 My next read was Tropical Exposure by Wynter Daniels. Quickie – Read for The Book Binge.   The story of a famous woman who just wants to go on vacation and have some peace and quiet.  What she gets is two weeks of smexin with her bodyguards.  But one is actually a tabloid reporter.  What will happen?  Cute story. 3.5 out of 5

I started reading Demon Blood by Meljean Brook earlier in the week and after 2 chapters decided that I wanted to re-read Demon Forged again.  Let me tell you it was just as good the second time around…maybe better than the first.  I just love the series and this book has so much going on that it’s mind boggling – but it never was too much.  Love it! 5 out of 5 (again)

I read Demon Blood by Meljean Brook right after that and it was great.  I read a review by Ana at The Book Smugglers that says it perfectly:“If Demon Forged was essentially a Big Picture book without losing sight of the romance then Demon Blood is a Romance book without losing sight of the Big Picture”.  Rosalia and Deacon’s story. Just a darned good read.  Also read for The Book Binge. 4.5 out of 5

And last on the list was Two-Week Trial by Missy Jane. Novella – Read for The Book Binge. A cute novella about a wealthy man who finds the woman he’s wanted for years and goes about winning her over.  The woman is leery since she doesn’t think much of herself but eventually gives in to a two week trial.  3 out of 5


I just read over my summaries and realized that this was obviously the “cute” week. lol  Yes, a lot of the books were cute.

Also, my entire list of reads from June is up here.

10 responses to “What I Read Last Week”