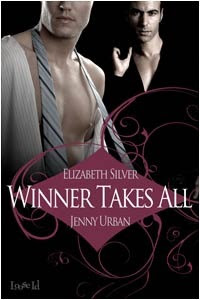 Dominic Taylor and Matt Harris have been friendly rivals – with occasional benefits – for a few years. With the downturn in the economy, though, Matt’s business is struggling. Dom, whose company is doing well, offers Matt a bet that could help save Matt’s company. But the terms of the bet would literally put Matt’s ass on the line and change the dynamic of their friendship.

As the deadline approaches, they graduate from making out to making love, raising the stakes as they each come to terms with what they really want, and what really matters.

No matter who wins, there will be no going back for either one of them. Because the winner takes all.

It seems that whenever Dom and Matt get drunk they end up getting each other off.  It seems that this is ok with Matt, as long as they’re drunk.  But in the light of day, Matt is not ok with it.  Nope, he’s not gay – he loves women – that’s his story and he’s stickin to it.  The problem with that is that he really likes when he and Dom are messing around with each other.  So maybe he’s not quite a straight as he thought.

When Matt’s business seems to be heading downhill Dom takes advantage of his friend by making a bet with Matt.  Matt’s employees will be saved in a takeover if he loses – which is a really good thing.  But he’ll have to actually let Dom have his wicked way with him as well.  Why is not more upset about that?

I really liked the story here.  I didn’t feel that Dom was truly taking advantage of Matt or his company as he was really trying to save it the best way he knew how.  Would he benefit in the end?  Oh, absolutely but Matt was so obviously more than curious I thought it was a great idea.  And the sex was uber hot.  I mean smokin.

So why did I not give the book a higher rating?  Well, I have to be honest, I got a little bored.  Yes, the sex was still hot at the end of the book but there was a lot of it. There was also a lot of dialogue which I normally love but didn’t for some reason in this story. It seemed a bit ho-hum to me. And though I liked Matt’s snarkiness it got a tad old by the end of the book. I realize that this was a defense mechanism to hide his deeper emotions but at times I needed to stuff a rag in his mouth. lol  I felt that the story had two parts to it…both the business side and the sexual side but the business side really fell by the wayside.  (That’s a lot of sides btw).

So in the end I thought that the first half of the story rocked and the last part was weaker but a good story nonetheless.