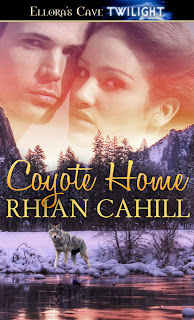 Coming home was never going to be easy for Rowan Wilder, but after six years she didn’t think it would be this hard. First she can’t control her inner coyote, then she has to deal with her mate and the madman out to get them both. Determined to take her rightful place in the pack, Rowan must face each hurdle and succeed. To fail could mean losing her life.

Quinn MacClellan is more than ready for the return of his mate and he’ll do anything to keep her safe and by his side. He couldn’t protect her years ago, but things are different now and he won’t let anything or anyone separate them again. Together they’ll confront all obstacles and ensure the future they both deserve.

This is a story about a young woman who had every right to a good life, a place of prominence in her pack, and a life filled with love because she had found her mate. None of this was to become reality for her, at least not as she began her adult life with Quinn. Marcus Connelly and his father ran the pack, were in total control of the pack council, and Marcus wanted her—not because he was in love with her but because he was obsessed with controlling her and in so doing, he would control the pack for years to come. He stalked her for months and ultimately attacked her in an attempt to rape/mate with her. Beaten, bruised, bleeding and fearing for her life, she left her pack, her family, her friends and her mate for six years, taking up residence in Australia. For six years she had denied her inner coyote and for six years she had lived as one who had truly lost everything she loved.

Now she has come back—first to a hunting cabin on a nearby mountain where she hoped to allow her coyote to emerge and where she was hoping to re-learn how to control her shifting from human to coyote and back. Staying with her was her mate Quinn, although he patiently waits for her to indicate that their personal relationship could be resumed and she could face going home to pack territory.

This is a story about the fall-out that comes when bullies are allowed to prowl unchecked and the damage they do remains unpunished. It is also the account of a young woman who has had to face not only these horrifying external circumstances but the fears that Marcus’ brutality has caused. Without friends or family, Rowan has had to find her own inner strengths and the will to combat her fears so that she can return to her rightful place at Quinn’s side as well as her place of responsibility in the pack. Now that she has returned, she learns that her brother is “sovereign” of her pack, Quinn is the “enforcer” and she is referred to as “the royal.” Yet Marcus is an ever-present danger that must be faced head-on: can the strength that she has found within herself truly brave this challenge?

I liked this story very much. It was about the emergence of a lovely woman from the shell of a frightened girl who is now standing shoulder to shoulder with her brother and Quinn. It is a beautiful love story between Rowan and Quinn and testifies to the truth we must all learn that adversity can either break us or it can make us stronger.

Rhian Cahill is a new author to me, but I came to appreciate her story-telling skills as I read this novella. She handled the plot well, developed the characters in an adept fashion and in spite of the short format was able to tell the story well. I got the impression at the end of the novella that there would be more to come in future novels or novellas. I intend to investigate this possibility because I am really interested in seeing whether Marcus gets his just due. Lovers of paranormal romance will find this book enjoyable, I think.