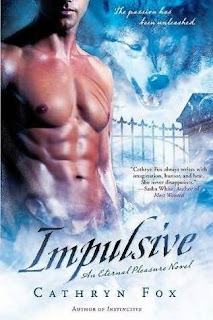 She’s fled her alpha wolf-and the entire paranormal community of Serene. A free woman-wolf, Sunray returns to Chicago-and the last thing she expects to find there is her reincarnated lover, who died the night she was changed into a lycan a century ago. Still, Sunray knows they can never revive their passion. Because now he’s a lycan hunter-and she, his prey…

Kane doesn’t believe this beautiful lycan’s story. Still, he recognizes Sunray as the sexy woman in his recurring dreams. For now, prey and predator have forged an uneasy truce as they join forces to capture a rogue shifter. But after their work is done, will either be able to resist a passion that could consume them?

100 year ago Sunni was with her lover, Ray, when they attacked by a large, vicious wolf. The wolf was actually a werewolf named Vall. Vall kills Ray and turns Sunni into a werewolf. Many years have passed and Sunni has killed Vall, or so she thinks, and she and two of her friends have faked their own deaths and fled Serene, the town of “others” that they previously lived in. Six months after her supposed death Sunni, now named Sunray, smells Ray’s scent on her friend’s jacket. Sunray goes in search of the man who bears the scent believing that he is Ray reincarnated.

Kane is the man that Sunray finds and he’s a PTF officer – a man who hunts and kills all lycan’s – but he’s completely into Sunray and her submission. When Sunray and Kane team up to find and kill Vall, Kane’s past comes through and he realizes that he is indeed Ray.

While this book started out being an interesting paranormal read for me I quickly found myself annoyed at the heroine. I understood that after 100 years she longed for her long lost love, Ray, but I felt that Kane and who he was today got swept under the table. Yes, Sunray did say that she loved who Kane was, as well as who Ray was, but her actions spoke to me differently than her words.

Vall’s involvement in the story also seemed anticlimactic. It was a very predictable story – bad guy, search for bad guy, kill bad guy, live happily ever after. While I enjoyed the writing I wasn’t a huge fan of the story. And while the book wasn’t bad it wasn’t great for me either. Then the epilogue came and I bout lost it. Thank heavens it was the end of the book or I would have put it down. lol

Right at the end, and yes Kane has been turned into a werewolf, they are hunting on a full moon together as wolves and having shifter sex. Not a problem for me except the other female wolves were waiting around for their turn! And apparently as a virile male in the lycan community that’s just A-ok. But it left a bad taste in my mouth to say the least. Especially when Kane says to Sunray, (something to the effect of) “You don’t mind that I fuck them, do you? You know you’re the only one I love, right?” Spoken like a true cheating bastard.

Anyway, not a bad book but there were too many parts of it that rubbed me the wrong way, unfortunately.

This book is available from NAL. You can buy it here

One response to “Guest Review: Impulsive by Cathryn Fox”