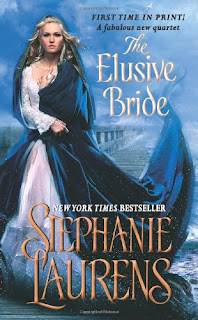 Judith’s review of The Elusive Bride (Black Cobra Quartet #2) by Stephanie Laurens
The second battle-hardened, completely unstoppable, all-male hero, an ex-officer of the Crown, confronts the deadly enemy known as the Black Cobra. He’s focused on his mission, then sees a lady he never dreamed he’d see again—with an assasin on her heels. She secretly followed him, unaware her path is deadly—or that she’ll join him to battle a treacherous foe. Through ever-present peril, through passion, desire, and ectasy, they race to reach England—and their destiny.

Miss Emily Ensworth is the niece of one of England’s foreign governors and she has been visiting India for six months. Her family wishes her to find her true soul mate and make a happy marriage, but the beaus she has encountered in England have never tempted her spirit or fired her body. They are willing to enable her to travel abroad in order to find someone who will be her equal and who will satisfy her desire for a loving marriage. While in India she and her military escorts are pursued and her life is preserved only through the sacrifice and heroism of one of the officers in her group. He gives her a document that must be preserved at all costs. And thus, Emily is drawn into the web of intrigue and murderous danger that swirls around the mysterious Black Cobra, a cult bent on destroying not only the English presence in India, but who is determined to overcome any good to the people of the Middle East.
Emily’s journey home to England coincides with that of Major Gareth Hamilton, one of the Crown’s ex-officers who are now charged with returning the document in question to the government officials who are responsible for ending the reign of terror caused by the Black Cobra. She has recognized that Major Hamilton has engaged her interest in a way no other man ever has, and while making her way to her homeland she is testing her budding conviction that Major Hamilton is “the one” for whom she has been searching for years.

There is action a plenty as the group composed of Emily’s retainers and Major Hamilton and his companions seek to outwit the cultists of the Black Cobra. The suspense is real and palpable, the romance is well-told and fulfilling. Stephanie Laurens is an expert story teller and she teases out this tale with characters that are colorful and multi-dimensional. Emily is a woman who is daring enough to insist that her life-partner be a man who can accept her as she is, a man who is willing to not only enter into a marriage that is for life, but whose love can celebrate her gifts and talents. Major Hamilton is a man who struggles with being a man of action and decision on the one hand, and one who recognizes depth of character and honor and whose emotions slowly come to be completely entangled with the powerful English lady who challenges his preconceptions about himself, his mission, and what a partnership can really mean.

This is by no means a fast read. This is for serious historical romance fans and readers who love a good mystery. The Black Cobra series is not turning out to be stories which are repetitive and lacking in creativity. Rather than using a formula, Stephanie Laurens has researched and probed and created a plot that is full of energy, interest, conflict, and romance. I read and reviewed the first of this series and must admit I wondered if we would be seeing just another series novel. Not surprisingly, an author of Lauren’s calibre has not disappointed and she has once again given us a great novel full of all that makes a good read really good! I think the dialogue is sometimes a little protracted and I have never been a fan of books full of diary entries. That is a personal thing with me. However, the diary does not detract from the flow of the story and does give insight into what drives Emily both in her pursuit of love as well as her thoughts on survival.

3 responses to “Guest Review: The Elusive Bride by Stephanie Laurens”