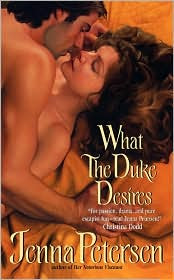 Rowena‘s review of What the Duke Desires (The Billingham Bastards, Book 1) by Jenna Petersen.

The duke always gets exactly what he wants . . . As the new Duke of Billingham, Simon Crathorne has one main duty to fulfill: find a proper wife and continue his family’s exalted name. But of all the eligible women who have come to his country party, he desires only one. And she may be the most unsuitable bride of all. Lillian Mayhew is desperate to expose a devastating secret about Simon’s distinguished late father so she can salvage her family’s reputation. Yet from the moment she meets her rakishly handsome host, she begins to question if she can destroy his world so callously. She once wanted nothing more than to destroy his good name—and now she wants nothing more than his kiss. Caught between vengeance and ecstasy, Simon and Lillian begin a passionate affair. But betrayal lurks behind every stolen touch—and the duke’s shocking past may be his ultimate undoing . . .

The last book that I read by Jenna Petersen (Her Notorious Viscount) was a good one. It was funny, entertaining and I really connected with the characters so I was really excited to start this book and I’m happy to announce that she once again entertained the socks off of me.

What the Duke Desires is the first book in her new series, The Billingham Bastards and it follows Simon Crathorne, Duke of Billingham. Simon’s father just died and he’s inherited the title. He’s got a lot of work cut out for him, filling his father’s shoes because his father was a pretty stand up guy. Simon and his father were close and Simon thought the world of him but taking over the reigns has made Simon realize that his father wasn’t the Saint that he once thought him to be. On top of taking over the title, Simon must find himself a bride to secure an heir to keep the line going. So he hosts a garden party and invites all of the eligible ladies of the ton to come and show themselves off so that he can pick a bride.

Enter Miss Lillian Mayhew. Lillian wasn’t exactly invited to the party but she made sure that she came to the party with her best friend, Lady Gabriela. Lillian’s on a mission, a mission that was prompted by her late father. You see, Lillian is tainted by scandal. The scandal being that her mother committed suicide and so with the ton whispering behind their hands about her and her family, it’s haunted Lillian. On her father’s deathbed, she finds out what happened that drove her mother to commit such a horrendous act. Finding out has hardened Lillian and makes her want to avenge her mother’s death. She concocts a plan to smear the man’s name who is responsible for her mother’s death, but while she’s trying to bring the man down, she’s falling for someone else completely.

It was really easy to fall into the romance between Simon and Lillian. They were easy to connect with and I really enjoyed getting to know Simon. Watching the truth unravel throughout the story for Simon kept me wanting more. I was anxious to see how Simon was going to react to everything he was going to learn about himself, his father and his family. I thought Petersen did a fantastic job of drawing the suspense out.

The one thing that drove me bat shit crazy was how long it took for Lillian to tell Simon the truth about why she came to the party in the first place. She had every opportunity to tell him and she kept withholding the truth from him. The more she didn’t say, the more angry I got at her. I was right there with Gabby thinking the same damn thing and frustrated as all get out when she would not open up her mouth and be honest with him. She let him go on and on about trust and still didn’t say a damn thing.

But in the end, I got over it and I forgave her because she wasn’t a bad heroine. Her reasons for holding out made sense to me and I was glad when her and Simon finally made up. The wealth of love Lillian had for Simon was well written. The lengths to which she was going to go to keep his secret and move on with her life was what really made me forgive her.

This was a great book to start this series off right. It had a lot of enjoyable moments and I’m pretty anxious to see what Petersen has in store for us with the rest of the series. I’m mighty anxious to see how she writes Rhys’ character in his story because I didn’t care for Rhys at all in this book. He was such a snob and his attitude – even though his attitude was shared by everyone in the ton – still rubbed me the wrong way. So I’m curious to see how Petersen will redeem him in my eyes. When everything comes out in the end and I found out that Rhys was the hero in the next book, I had me a good laugh because, well…haha Rhys!

This was a great book and I definitely recommend this book to historical lovers out there. I think this is an enjoyable read that you won’t want to miss.

This book is available from Avon. You can buy it here, here or here in e-format.

One response to “Review: What the Duke Desires by Jenna Petersen.”