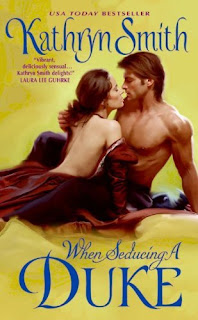 Tracy‘s review of When Seducing a Duke by Kathryn Smith

Greyden Kane, Duke of Ryeton is a very bad man. At least he used to be. He used to be out to get whatever he could from women and he truly never cared who was hurt in the process. But 4 years ago he was attacked and his face was scarred. Since that time he has become a recluse and only see’s his servants and his family without wearing a mask (those few times he does venture out of his house).

Along comes Rose Danvers, a sweet 23 year old who has loved Grey for years. Grey has taken care of Rose and her mother since her father died. She is now out of mourning and ready to go out and get a husband. She wants Grey but knows he’s not going to marry her. Except things don’t always go as planned.
Grey and Rose end up marrying but the whispers about Grey, whispers about Rose and the blatant comments Rose gets soon has her staying out of society more and more. She wants Grey to go out with her but knows he won’t. This starts to drive a wedge between the two and puts them both on edge.
This was my first read by Kathryn Smith and it definitely won’t be my last. I liked the flow of the book as it was a constant rhythm rather than the hurry up and wait that we sometimes see in historical novels. There were no rescuing of damsels in distress, it was just a good book where slow and steady won the race.
Ms. Smith definitely knows how to write some great seduction scenes as well. At the beginning of the book Grey and Rose are at a masked ball. Grey is looking for a woman that looks like Rose so that he can “get her out of his system” – which we all know never works out for the men. When he finds a woman, he meets her in a room and they have their wicked way with each other. Little does Grey know that the woman is indeed Rose and makes plans to meet her the following week. In these scenes there was an urgency and yet I found that they weren’t rushed and became very much a part of the story.
When Seducing A Duke is very much a story about a man finding that love can overcome fear and shame, but it is also a book that shows the importance of ones family and I can’t wait to read the books about the rest of Grey’s.
Rating: 4 out of 5
This book is available from Avon. You can buy it here or here in e-format.