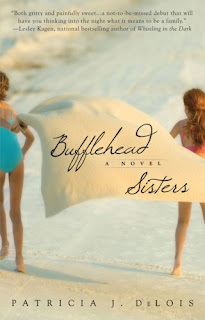 As an only child, Janet longs for a sister her parents are unable to give her. In kindergarten she meets Sophie, a strange and imaginative girl with a troubled family life. As friendship grows between the two girls, Janet believes her prayers have been answered, especially when members of her family embrace Sophie as one of their own.

Sophie’s troubles continue to follow her through high school, and Janet stands by her “sister” until, in adulthood, she learns of a devastating secret Sophie has kept from her. Janet’s world is turned upside down—and she discovers there may be a limit to what sisters should share.

This book follows Janet from the time she is in Kindergarten and meets Sophie to when they are about 30 years old. It’s Janet’s life, told from Janet’s point of view, but it’s really a story about Sophie and how her life effected Janet’s. Sophie is a messed up kid. Her father takes infidelity to the extreme and her mother has serious mental issues. Eventually her mother goes over the edge and is taken away and locked up – then her father just starts bringing his conquests home. Sophie starts spending more and more time at Janet’s and as much as Janet thinks of Sophie as a sister and Janet’s dad loves her to death, Janet’s mother doesn’t care for her. This dislike only gets worse as Sophie grows up and starts doing drugs, sharing some free love and getting into trouble. Janet’s mom urges Janet to stay away from her but the girls are inseparable.

As they get older Sophie really takes the free love (yes, the story takes place in the 60’s & 70’s) to the nth degree and sleeps with just about everything that walks. When she is 16 she starts an affair with a married man who she falls in love with. Even though the man breaks it off with her she remains in love with him throughout the book. This man is the cause of a huge rift between Sophie and Janet toward the end of the book and almost completely decimates their relationship.

While the story started out pretty good I had issue with the way it was told when the girls were small. This was supposedly from Janet’s POV and the things that she was thinking and saying when she was 5-7 were completely ridiculous – kids just don’t talk like that. Also, the way that Janet’s parents were talking to Sophie and Janet was uber inappropriate. I had to stop and wonder if the author had children and if she did, did she talk to them that way when they were little? Just very strange. When the girls got older I didn’t mind as much as it seemed to flow better.

The relationship with the married man: while I knew who the man was almost immediately it wasn’t revealed until near the end of the book. I felt that more time should have been spent on Janet and Sophie trying to fix their relationship from this affair than was given. I personally felt that the way the book ended was ungratifying. How far can your friends and your family eff up and you still love them? That’s basically the question of the book and I’m not sure it was answered.

The book is a coming of age tale that is fun at times, slightly perverted at times, disturbing at times and delves into the issues of friendship and family. It kept my attention and was a quick read but I can’t say I would tell people to run out and read it.

This book is available from Penguin. You can buy it here.