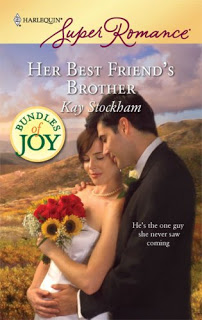 They had one night. That’s all Shelby Brookes would allow herself to indulge in with Luke Tulane. Yes, he’s gorgeous. And yes, he’s the greatest guy she knows, but he’s her best friend’s brother, for crying out loud! She’s pretty sure there are rules against sleeping with friends’ brothers.

Then Shelby discovers she’s pregnant. And Luke’s determined to do the right thing—down to the bended-knee proposal and the meeting at the altar. As tempting as his offer is, Shelby’s convinced she’s not the marrying kind. She’s bound to hurt him, and that’s definitely against the rules of friendship. Still, she doesn’t count on how persuasive Luke can be when he really wants something…her.

Yes, as the blurb said, Shelby finds out she’s preggo by Luke. She thought she could never get pregnant so she told him at the time that she had the birth control taken care of. Now in this day and age why a man wouldn’t use a condom anyway is beyond me, but I guess that’s just me. Anyway, when Luke finds out about the pregnancy he is ready to step up to the plate. He’s been more than half in love with Shelby for years and to him it’s the next logical step. Not to Shelby. She wants nothing from him – and I mean nothing. She basically says she doesn’t even want him in the baby’s life and he should just go about his business. He’s appalled and even threatens legal action if she tries to keep him from his child. Eventually Shelby gives in and marries Luke but she’s certainly not happy about it.

You see Shelby comes from a broken home. Her parents love each other but have married and divorced 5 times. There have been reasons for each break up and reunion but Shelby’s had to live through all the fights and everything else. When she finds out even more about her family history she’s set on believing that even though she’s marrying Luke it can’t possibly work and the only reason he wants her is to be with the baby.

Things are tough for both Shelby and Luke and when Shelby is in an car accident she crawls even farther into her own shell and tries to push everyone away.

This was a good book but I had serious problems liking Shelby. I’m the first person on earth to say that two people should not get married just because they’re pregnant but with Luke in love with Shelby I could kind of see things from his point of view. Shelby was just a bitch. Yes, she had issues with her mother, her father, their relationship, her own self-esteem issues and so much more but she was just mean to Luke. She said some horrible things to him and at times I wanted to crawl through the pages and give her a big ole slap!

I liked Luke a lot in this book and he was just a decent man who could see his own faults – and even some he saw but didn’t really have. He really stood by Shelby until he just couldn’t take it any longer…and man he took a lot. At times toward the end of the book I was thinking – run, Luke, run! But that wouldn’t have been a romance, now would it? lol

Despite the issues with Shelby I thought it was a pretty good book. I really like Kay Stockham’s work and will definitely be reading the next book in the series (that I think just came out).

Guest Review: How to Love a Duke in Ten
8 Comments
Tagged: Kay Stockham, Review, Year of the Category Challenge

8 responses to “Year of the Category Review: Her Best Friend’s Brother by Kay Stockham”