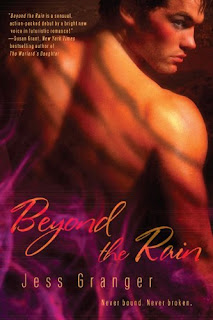 Tracy‘s review of Beyond the Rain by Jess Granger

In a universe torn apart by civil war, a warrior and a slave must fight for their freedom, for their lives, and for a love that may destroy them both…

After five years behind enemy lines, Captain Cyani is ready to retire to her homeworld of Azra as one of the Elite — the celibate warrior sisterhood that rules the planet. But first she must complete one final mission to rescue her fellow Union soldiers. The last thing she expects to find is a prisoner, chained and beaten — but radiating feral power and an unbroken spirit…
Soren is a Byralen, an enigmatic people who possess a unique hormone that they use to bond with their mates — and that is sold as a sexual narcotic in the shadow trade. For years, he has endured torture at the hands of his captors as they leeched his very essence. The last thing he expects is to be freed from slavery by a beautiful warrior woman with radiant blue eyes.
Driven by her rigid sense of honor, Cyani frees Soren even though her life hinges upon the success of her mission. But after so many years in bondage, his hormones are so unbalanced that he will die if he does not bond with a woman. Can the lovely but distant warrior be the woman he needs to survive, or will the forbidden bond destroy them?

Captain Cyani is on her last Union mission. After this mission she will go back to her home planet to be an Elite. She’s not looking forward to it but she has no choice. When she finds Soren and sets him free it sets her on a totally different path than what she was expecting.

This book was not what I expected. When the ladies from The Book Binge send me book names to see if I’d like to read and review them I go to the author’s website and read a blurb and/or an excerpt. I decide from that whether I’d like to read the book or not. After the book is sent to me I really don’t read the back of the book to see what it’s about. I figure if I wanted to read it at one point then I will again. This leads to some surprising reads – of which this was one. I had completely forgetten that it was a futuristic story so was a little surprised there. But I also remembered, vaguely, that I thought the book was erotica for some reason. I think because the hero in the story can become addictive, but I’m not sure. That being said, I was in for a pleasant surprise.
The story of Soren and Cyani was the coming together of two people who had had some horrible things happen to them in their lives but were strong enough to survive and do what needed to be done. Soren had been captured and forced to have painful extractions made of the aphrodisiac-like hormones in his body. He had no idea how much time had passed since he’d been abducted and he just wanted to get home. He was pretty resigned to dying though, even after being rescued. He either needed to be home where his “lifegarden” was, which he was pretty sure was dried up and useless at this point, or bond with a woman, which he knew was impossible to do in the timeframe that he had.
Cyani had lived on her horrid home planet that was mostly a gigantic cesspool. It was the epitome of light and dark. Those who lived under the canopy of the trees and those who lived above. No light got under the canopy and thieves and criminals abounded. Cyani had been beaten and forced into service with the Union in order to save her family. When she went back to her planet after her duty was fulfilled there would be nothing but silence for her.
When Cyani and Soren get to know each other it really is very sweet. For a book that I thought was erotic there’s very little actual sex in the book. But the sensuality of the attraction was very compelling. I don’t want to tell you too much about what happens and give it all away.
Towards the end of the book Cyani has to make a horrible decision between duty and love and it’s not one I would ever want to have to be faced with. One of the issues I had with the book is that the decision was pretty much taken out of her hands, which ended well, but I thought it took some power from Cyani’s strength of character.
So although I had issue with some things I thought it was a good read. At the end of the story we were led to believe that there will be more books involving secondary character and if that happens I think I will be reading more in this series.
Rating: 3.75 out of 5
This book is available from Berkley Trade. You can buy it here or here in e-format.