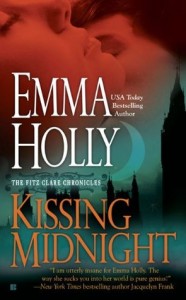 Edmund Fitz Clare has been keeping secrets he can’t afford to expose. Not to the orphans he’s adopted. Not to the woman he’s been yearning after for years. This seeming professor of history is a shapeshifting vampire, determined to redeem past misdeeds.


Estelle Berenger knows better than to fall for her best friend’s father, but he holds the key to a mystery: that ever since she was struck by lightning, she’s had abilities no normal woman should be able to call upon.The question is, can these star-crossed lovers survive a vampire war?

Estelle has been in love with her best friends father since she was 15 and first met him. While it was a completely innocent love at first, since she’s come of age she has anything but innocent thoughts about Edmund Fitz Clare.

Edmund, almost against his will, finally gives in to his desire for Estelle and realizes that he’s loved her for a damned long time. Even though he’s a upyr, and can’t let her know that information, he wants to be with her for the rest of his life. Estelle does find out what Edmund is which makes for some incredibly tense moments.

While the E and E romance is happening, Edmund’s oldest adopted son, Graham, is being thralled by a fellow upyr. He’s told what Edmund is and is made to believe that Edmund is the epitome of evil. Graham is torn between taking care of his siblings, his loyalty to Edmund and his conscience, and of course the thrall. He’s not quite sure what to believe and what to do. When all hell breaks loose at home Graham is unsure who are the bad guys and who are the good guys.

This is story 6 in the upyr series of vampire/shapeshifting books by Emma Holly. I’ve not read any of the others, but I didn’t feel like I had missed any information by starting with this one. Also, from the author’s website I found that this book and the next 2 in the series are tightly connected. In fact so much so that there wasn’t a definite conclusion to this book (I’m not saying what cuz that would just give too much away).