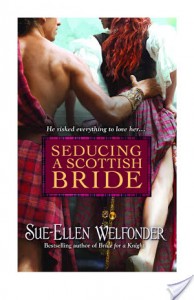 He risked everything to love her…

Lady Gelis MacKenzie, one of the most desirable heiresses in the Highlands, yearns for love. When a vision shows her a darkly seductive man, she knows she’s seen her future betrothed. But when she finally meets the handsome stranger, she finds a man who has endured more than any warrior can bear. She must use all her wiles to convince him that love is worth any challenge.

With his dashing good looks and smoldering eyes, Ronan MacRuari, known as the Raven, is every woman’s dream. Yet with his late wife newly buried and the MacRuari curse haunting him, he weds only to satisfy his clan. Refusing to believe in curses, Gelis trusts the magic of her second sight. As she kisses away the Raven’s doubts, she unleashes a torrent of desire. Yet Ronan knows that loving Gelis places her in mortal danger. Soon he’ll fight dangerous forces to protect her as only a Highlander can — with his whole heart, his honor, and his life….

And can I just say I love the cover of this book! There’s just something about it. Maybe becuase we see so many “fronts” of people these days that it’s a nice change to see the back! lol