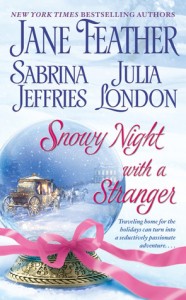 I’m a huge fan of anthologies and was very excited to see a Christmas anthology on the shelf when I hit my local bookstore.

Edward Vasey, Viscount Allenton, is journeying precariously through a snowstorm when his coach is overtaken by high-waymen! Robbed of his money, Ned takes refuge at Selby Hall, where a spirited beauty with a shocking secret may steal something more — his heart.

Sabrina Jeffries unlocks the heart of an embittered lord….

When a coach accident strands heiress Elinor Bancroft at the home of the notorious Black Baron, she discovers the Christmas Day heartache that darkened his soul years ago — and her generous heart brings a festive air to his home and reawakens his spirit to love.

Julia London sends a debutante into the wintry Scottish wilds….

Searching for her rakehell brother, an earl lying low in the wake of a scandalous affair, Fiona Haines is led by a rugged Highlander who obscures his scarred face. As they journey on, Fiona draws closer to her brave, enigmatic protector — but will fury or passion ignite when he reveals his identity?

A Holiday Gamble by Jane Feather


This story takes us in to Northumberland where the snowy weather has turned into a blizzard and Viscount Allenton is stuck in the middle of it. He takes refuge at the nearest house which is owned by Lord Selby. There Lord Allenton finds himself enamored with Lady Georgiana Carey – the home owner’s 20 year old ward. As the blizzard gets worse Lord Allenton realizes that things are not as they seem with Georgiana. It seems that Lord Selby has some villainous ideas about what to do with Georgiana’s inheritance which include marrying her off to his cohort, Godfrey Belton. This was a cute little story of finding love in the strangest of circumstances.Rating: 3 out of 5

When Sparks Fly by Sabrina Jeffries
Elinor is on her way to her father’s house with her cousins and aunt for Christmas when a carriage accident forces the family to seek help from a man known as the Black Baron. Martin, Lord Thorncliff aka the Black Baron, was accused of killing his own brother during a mine explosion and has cut himself off from just about everyone. He only keeps male servants because he doesn’t trust women to not get hurt. After meeting Ellie he starts to think that maybe having a woman around wouldn’t be such a bad idea, but he still can’t forgive himself for his brother’s death.I loved this story. I thought it was a great story of love and acceptance and truly enjoyed reading it.

Snowy Night With A Highlander by Julia London

Lady Fiona Haines has to travel to Scotland to find her rake of a brother to try to keep him out of serious trouble. She enlists the help of a Laird that she’s known in the past to help her get to his castle in the Highlands. Unfortunately the Laird in question, an arrogant man according to Fiona, made some disparaging remarks about Fiona at one time and she does not like him at all.Very early into the journey Fiona’s lady’s maid abandons her and Fiona is forced to travel with the Laird’s man who she starts having feelings for. Little does she know that the man is the Laird himself, Duncan Buchanan. Caught in a blizzard the two are left to survive the nights in the storm as well survive the growing feelings they have for each other.This was my favorite of the three stories. The story of Fiona and Duncan coming together was quick, romantic and definitely worth the read.